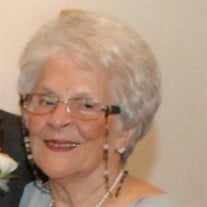 Funeral Services will be held at 12:15 PM on Saturday, October 9, 2021 in Delhomme Chapel of the Flowers for Albertine "Buttons" Adamson Rev. Ken Domingue, Pastor of St. John Berchmans Catholic Church will conduct the funeral services. Burial will take place in Lafayette Memorial Park Cemetery. "Buttons" Adamson, born Albertine Veazey, a longtime Lafayette educator, beloved wife, mother, and friend, died at home on October 3, 2021. She was 85 years old. Buttons was born in Pecan Island, Louisiana on March 4, 1936, the daughter of the late John and Julia Veazey. She received her bachelor’s degree in Home Economics from Southwestern Louisiana Institute . She returned to the University of Southwestern Louisiana to gain her credential in elementary education and found her calling as a lower grade and kindergarten teacher in Lafayette Parish for 27 years. Students at Cathedral, Woodvale, and Prairie Elementary Schools benefitted from the education Mrs. Adamson provided them. While at SLI, Buttons also met her future husband, Robert (Bob) Adamson. College friends called them, “Buttons and Beau.” She was a dedicated cheerleader for the teams Bob coached in his early career and his loyal confidante when Bob moved into school administrative positions. Bob and Buttons were happily married for 61 years. Alongside Bob, Buttons raised their three children and was involved with their myriad activities in and out of school. Buttons and Bob planned summer vacations with long road trips for the family, exploring the United States and visiting friends and family. In retirement they enjoyed traveling together in Europe, Canada, and beautiful regions of this country. Throughout her life, Buttons loved to sew. Many family members have beautiful quilts she lovingly created for them. Buttons enjoyed the camaraderie of the KOA Quilters. Buttons was a talented cook and loved reading recipes and collecting cookbooks. She and Bob often gathered family at their home for barbecues, crab or crawfish boils, and many holiday dinners. Buttons enjoyed her participation in the Les Femmes du Sud and frequently entered local recipe competitions. She treated neighbors to her tasty Sock-It-To-Me cake and made memorable desserts for Bob’s supper clubs. But her favorite cooking activity by far was sharing the kitchen with her grandchildren, making specialties like watermelon cookies and lemon bars. Buttons was happiest when her family was gathered around her. Whether she was teaching a grandchild to recognize letters and numbers, sew a straight seam, properly win a game of HORSE at the basketball goal, or take first place at card games, she cherished being a grandmother. She was proud of her grandchildren’s accomplishments and loved bragging about them to friends and strangers alike. Buttons was predeceased by her beloved husband Robert Adamson. Buttons leaves behind her two daughters, Dawn (Chuck) Dobie and Taina Adamson, her son, Lance Adamson, the grandchildren who knew her as “Granny”: Sevie (Steven) Zeller, Ellen (Yoni) Dobie-Geffen, Aaron Dobie, Brock Adamson, Avery (Colin) Comeaux, and Camryn Adamson, and six great grandchildren. Of her eight siblings, only her sister Georgette Veazey Nunez survives her. Pallbearers will be Brock Adamson, Chuck Dobie, Steven Zeller, John Shields, Jim Shields, and John Martin. Memorial gifts can be made to Shriners Children’s Hospitals or the charity of your choice. While numerous medical professionals gave Buttons excellent care throughout her life, the family wishes to give special thanks to Dr. Thomas Voitier II, nurse Serena Bailey, caregivers Tina Courville, Micah Foret, Chantel Provost, Mckenzie Trappey, Joanna Alexander, and hospice nurses Devin Orellana, Jessica Koski, Desiree Breaux, and Wendy Cole. The family requests that visiting hours be observed at Delhomme Funeral Home - Bertrand on Saturday, October 9, 2021 from 9:00 AM to 12:00 PM. Personal condolences may be sent to the Adamson family at www.delhommefuneralhome.com. Delhomme Funeral Home, 1011 Bertrand Drive, Lafayette, LA is in charge of funeral arrangements

The family of Albertine "Buttons" Adamson created this Life Tributes page to make it easy to share your memories.

Funeral Services will be held at 12:15 PM on Saturday, October...

Send flowers to the Adamson family.