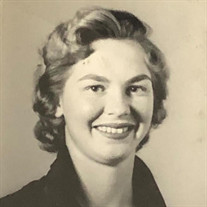 A memorial service will be held at 1 pm on Friday, August 27, 2021 in Delhomme Funeral Home- Bertrand for Alcion Larson Sandefur, 84, who passed away at her home on Tuesday, August 24, 2021. Reverend David Denton will conduct the memorial service. Burial will take place in Greenlawn Memorial Gardens Cemetery. Alcion, a resident of Broussard, LA was born in the community of Bayou Chene, LA and was the daughter of the late Herman “Shine” Larson and the former Mary Armead Carline. Alcion was a member of the first class to graduate from the new Lafayette High School on West Congress Street. She later went to work for State Farm Insurance and stayed with them for 41 years until her retirement. Nobody who knew Alcion was surprised when she rose in the ranks of State Farm at a time when the upper-level positions were held predominantly by men. Of the multiple hardships that Alcion had to face in her life, the most devastating were the losses of her two children, Bryan as a teenager and Angela in mid-life. Alcion is survived by her two grandchildren, James Ronald Edge, Jr. and Jennifer Lynn Edge and her son-in-law James Ronald Edge, Sr. along with two stepchildren, Michael Sandefur and Vicky Sandefur. She is also survived by her sisters, Lila Mae Larson Curry, and Judy Larson Schouest, her brothers Larry Gene Larson, Herman Huey Larson, Ronald Dean Larson, and Gary Ernest Larson. Alcion is survived by numerous nieces, nephews, and cousins. She was preceded in death by her parents, her husband Charles Sandefur, her two children, Bryan Sandefur and Angela Kay Sandefur Edge, a stepson Craig Sandefur, her sister Velma Lois Larson, her brothers Roy Oliver Larson, Henry John Larson, Eldridge Overton Larson, and Carl Curtis Larson. The family requests that visiting hours be observed at Delhomme Funeral Home on Bertrand Drive on Friday, August 27, 2021 from 12 noon until services at 1 pm. Personal condolences may be sent to the Sandefur family at www.delhommefuneralhome.com. Delhomme Funeral Home, 1011 Bertrand Drive, Lafayette is in charge of arrangements.

A memorial service will be held at 1 pm on Friday, August 27, 2021 in Delhomme Funeral Home- Bertrand for Alcion Larson Sandefur, 84, who passed away at her home on Tuesday, August 24, 2021. Reverend David Denton will conduct the memorial... View Obituary & Service Information

The family of Alcion L. Sandefur created this Life Tributes page to make it easy to share your memories.

Send flowers to the Sandefur family.