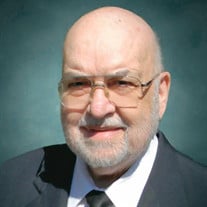 A Mass of Christian Burial will be held at 10:00 AM on Monday, January 25, 2021, in St. Pius X Catholic Church for Antonio "Tony" Peter Cutrera, 83, who passed away on January 17, 2021, surrounded by his loving family. Reverend James Brady, Pastor of St. Pius X Catholic Church, will serve as Celebrant of the Mass and will conduct the funeral services. Interment will take place in Lafayette Memorial Park. Tony Cutrera, a resident of Lafayette, was the son of the late Biaggio Cutrera and the former Helena Bergeron. Mr. Cutrera graduated from the Academy of the Immaculate Conception (now Opelousas Catholic), attended Immaculata Seminary and graduated from Southwestern Louisiana Institute (now ULL) in 1958 with a Bachelor of Arts degree. He was hired by Mr. Maurice Heymann and continued his employment with Mr. Herbert Heymann as Advertising Manager and Display Director for Heymann’s Department Store for 51 years. A true renaissance man, he was also a freelance commercial artist for a multitude of Acadiana businesses. Tony pursued his passion for the fine arts as creator of countless paintings in a variety of media, winning many awards of distinction for both fine art and commercial art. In addition, Mr. Cutrera was an accomplished jazz and classical musician, playing bass with scores of musical groups. Tony was a founding member and benefactor of the Acadiana Symphony Orchestra, performing with the ASO for 35 years. In partnership with his brother Buddy, he owned Cutrera Brothers Music Center and Radio Shack, Baldwin Piano and Organ Studio and “The Musician” music store, with locations in Opelousas, Lafayette and Ville Platte. Tony was a charter member of the Lafayette Art Association, editor of the L’Acadien college yearbook, held leadership roles with Boy Scout Troop 19, President of the Lafayette High School Band Parents Booster Club, eucharistic minister at Our Lady of Fatima and a member of numerous other national and regional organizations and boards. He is survived by his wife of 63 years, Ludora D. Cutrera; daughter, Dona Cutrera Williams; son, Antonio P. Cutrera, Jr. (Annette); son, David L. Cutrera; daughter, Janet Cutrera Pari (Rick); and son, Christopher P. Cutrera; granddaughters, Hannah LaHaye and Emily Pari; two great-grandchildren; brother, Michael A. Cutrera (Nathalia). He was preceded in death by his parents, Biaggio and Helena Cutrera; and brothers, Malcolm Cutrera and Budge "Buddy" Cutrera. Visiting hours be observed at Delhomme Funeral Home - Bertrand on Sunday, January 24, 2021 from 4:00 PM to 8:00 PM. A Rosary will be recited at 6:30 PM on Sunday evening in the funeral home. Visiting hours will continue Monday, January 25, 2021, from 8:00 AM until 9:30 AM. The family requests those who wish to express sympathy to consider making a donation to The Acadiana Symphony Orchestra and Conservatory of Music in Tony Cutrera’s name. Personal condolences may be sent to the Cutrera Family at www.delhommefuneralhome.com. Delhomme Funeral Home, 1011 Bertrand Drive, Lafayette, LA, is in charge of funeral arrangements.

A Mass of Christian Burial will be held at 10:00 AM on Monday, January 25, 2021, in St. Pius X Catholic Church for Antonio "Tony" Peter Cutrera, 83, who passed away on January 17, 2021, surrounded by his loving family. Reverend James Brady,... View Obituary & Service Information

The family of Antonio "Tony" Peter Cutrera created this Life Tributes page to make it easy to share your memories.

Send flowers to the Cutrera family.