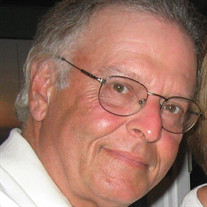 A Mass of Christian Burial will be held at 2:00 pm on Monday, January 20, 2020 at St. Mary Mother of the Church for Arthur “Art” Frank Barry, Jr., 70, who passed away on January 15, 2020. Msgr. Richard Greene will be Celebrant of the Mass and will conduct the funeral services. Concelebrant will be Reverend Cedric Sonnier. Burial will take place in St. John Mausoleum. Art, a resident of Lafayette, was the son of the late Arthur Barry and the former Bessie Lee Danel. Arthur F. Barry, Jr. (Art) was born in Conroe, Texas, but was a lifelong resident of Lafayette. He was a graduate of Cathedral High School for boys in 1967, and attended U.S.L. Art was an avid reader, a great story and joke-teller, a man blessed with a compassionate heart and an awesome, infectious laugh. Art was one of Cathedral’s highest-scoring basketball players, averaging 27 ½ points per game. He was named Outstanding Athlete at the school’s Annual Sports Banquet in his senior year. He had led his team to the State Playoffs, scoring 45 points in that game. Art started a career in the oil business in 1974, where he began working for Oil Center Research. He then began his own service company, B&L Oilfield Services, in 1978, and started another small company, Sub-Rental Tools in 1984. He truly found his niche when he began his real estate career. He worked with Sam Robertson Real Estate from 1996 until the present. He loved working with Sam, and building a career that encompassed his dedication to all his clients. Commercial real estate was, toward the end, his passion. Art was a member of the Krewe of Gabriel of the Greater Southwest Mardi Gras Association from 1979 until the present. He served as a Duke in 1984. Art was a member of Oakbourne Country Club for 30 years. He was very passionate about tennis and golf. He won numerous tennis and golf tournaments over the years. He excelled in these sports due to his drive to be the best that he could be. Making a “hole-in-one” was another testament to his skill and he was named Club Champion in 1989. In later years, his pride and joy were his grandchildren. He enjoyed having them spend the night and enjoyed watching their sporting events. He was extremely proud of all of their accomplishments. He loved calling them to tell them how proud he was of them for each and every one. He is survived by his wife, Marlene John Barry; two children, Trey Barry, and Angela Hutchison and her husband, Scott; four grandchildren, Hayden, Lily, John Hayes, and Kate Hutchison. He is also survived by his sister in law, Kathy John Jackson and her husband, Gerald, and their children, Tracy Jackson and Brett Jackson, and his brother in law, Gregory John. He was preceded in death by his parents and one sister, Lynda Lee Barry. The family requests that visiting hours be observed at Delhomme Funeral Home - Bertrand on Sunday, January 19, 2020 from 4:00 PM to 8:00 PM. A Rosary will be recited at 6:00 PM on Sunday evening in the funeral home. Visiting hours will continue on Monday from 11:00 AM to 1:30 PM. Pallbearers will be Trey Barry, Scott Hutchison, Brett Jackson, Gerald Jackson, Wade Jumonville, and Patrick Killeen. Honorary Pallbearers will be Greg John, Jimmy Hutchison, Dr. Robin Barry, Dr. Jonathan Joseph, Mark Tolson, Sam Robertson, Ronnie Landry, Brad DeHart, Pit Hesterly, Bill Kallam, Jimmy Adams and Dennis Smith. The family wishes to extend their gratefulness to Dr. Fadi Malek, the ICU doctors and nurses in ICU at Lafayette General Hospital for all the love, care and support they received during this time. Personal condolences may be sent to the Barry family at www.delhommefuneralhome.com. Delhomme Funeral Home, 1011 Bertrand Drive, Lafayette, LA is in charge of funeral arrangements.

The family of Arthur Frank Barry Jr. created this Life Tributes page to make it easy to share your memories.

Send flowers to the Barry family.