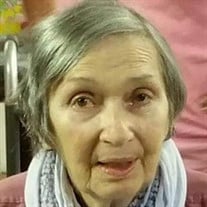 Graveside Services will be held on Saturday, March 28, 2020, at Ebenezer Cemetery in Crowley for Betty Derise Faulk, 77, who passed away on March 23, 2020. Father Mark Derise, Pastor of Sts. Peter and Paul, will conduct the graveside services. Betty, a resident of Lafayette, was the daughter of the late John Derise and the former Evelyn Bourque. A graduate of Jeanerette High School, class of 1960, she then married her high school sweetheart and traveled the States with her husband. In 1969, Betty adopted her twin daughters to whom she devoted her life. A woman of great faith, she taught religion classes in her home for over 12 years. After her children were grown, Betty began working for Baker Hughes where she retired after 23 years. Upon retirement, she spent most of her time tending to her plants and loving on her grand-kids & great-grand-kids. Betty was known for her extravagant love and care for her family & friends. She is survived by her twin daughters, Terri Faulk Fava (Sean) and Kerri Elizabeth Faulk (David); grandsons, Tyler DeCesare (Allie), Hunter Faulk (Courtney), Payton LeBoeuf (Kayla); granddaughter, Lillie Fava; great-grandchildren, Leighla, Grayson and Braidyn; niece, Pamela Chaney Broussard (Richard); nephew & godchild, Troy Chaney (Cindy); nephew, David Chaney (Debbie); brother-in-law, Lynn Chaney; and great-nieces & nephews, Daniel Broussard, Haley Broussard Hebert, Logan Chaney and Madison Chaney. She was preceded in death by her husband of 32 years, Austin Terrell Faulk; parents, John and Evelyn Derise; sister, Gertrude Derise Chaney; and grandson, Dillon Binkley. The family will hold a private viewing with immediate family only and requests the public kindly respect their privacy during this time. Pallbearers will be Sean Fava, Tyler DeCesare, Hunter Faulk, Payton LeBoeuf, Troy Chaney and David Chaney. Honorary Pallbearers will be Lynn Chaney and Richard Broussard. The family would like to thank Kim Credeur, the staff of Magnolia Estates and Heart of Hospice, for their help and compassionate care. Personal condolences may be sent to the Faulk family at www.delhommefuneralhome.com. Delhomme Funeral Home, 1011 Bertrand Drive, Lafayette, LA is in charge of funeral arrangements.

Graveside Services will be held on Saturday, March 28, 2020, at Ebenezer Cemetery in Crowley for Betty Derise Faulk, 77, who passed away on March 23, 2020. Father Mark Derise, Pastor of Sts. Peter and Paul, will conduct the graveside services. Betty,... View Obituary & Service Information

The family of Betty Derise Faulk created this Life Tributes page to make it easy to share your memories.

Send flowers to the Faulk family.