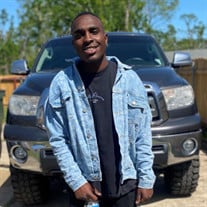 Funeral Services will be held at 11:00 AM on March 19, 2022 in Delhomme Funeral Home Chapel of the Flowers for Bobby James Celestine, Jr., 27, who passed away on March 9, 2022. Reverend George Celestine will conduct the funeral services. Burial will take place in Greenlawn Memorial Gardens Mausoleum. Bobby graduated from Acadiana High School, Business Academy, Class of 2013. When he smiled, he would brighten up every one’s day with those shiny straight teeth. He was a people person, very loveable, kind, and sweet. He was always the light at a party, entertaining and telling jokes. We can’t forget about that truck, OMG, he cherished that truck like a person. Sometimes he wouldn’t even move out of his truck, he would just sit inside of his truck and listened to music. He kept his truck clean and also drove it at a slow chill pace. He would say, “he was cruising”. He enjoyed playing basketball, PlayStation, and hanging out with friends and family just having a good time. He was very respectable, loving, and charming. While in school he worked with his father, painting. He was always proud of his work when he painted. After graduating he worked a few other jobs and later went to school and attained a CDL where he worked in the Trucking Industry until the pandemic hit. He had two Godchildren that were like his own, his nephew Ashton and Niece Aubrey. He constantly checked on them, visited, babysat, and loved like his own. His favorite saying was, “I am the man”. Bobby, a resident of Lafayette, was the son of Bobby J. Celestine, Sr. and the former Aleathia Henry. He is survived by his parents; sister, Bisa Celestine; brother, Joshua Henry (Jacquetta); maternal grandparents, Donald and Louise Henry; paternal grandmother, Patricia Solomua and husband, Solo; nephews, Haidon Henry, Ashton Sampy, Joshua Henry, Jr., and Kadience Henry; nieces, Jamya Henry, Kamille Guidry, and Aubrey Edmond; as well as a host of aunts, uncles, family and friends. He was preceded in death by his twin siblings, Beounca and Brandon; grandfather, John Celestine, Sr., aunt, Rosanna Celestine; maternal great grandparents, Hubbie and Virginia Wilridge, Andrew and Mildred Henry; paternal great grandparents, Simon and Angelina Jack, Leroy and Rita Celestine, and the late Rose Ann Celestine. The family requests that visiting hours be observed at Delhomme Funeral Home - Bertrand on Saturday, March 19, 2022 from 8:00 AM until time of service. Pallbearers will be Kesler Decuir, Carderion Beale, Trevon Rubin, Donald Celestine, Jr., Keaven "Kave" Franklin, Denzel Arceneaux, Lance George, and Marcello Damond Celestine. Personal condolences may be sent to the Celestine family at www.delhommefuneralhome.com. Bobby James Celestine, Jr. and his family were cared for and entrusted final arrangements to Delhomme Funeral Home, 1011 Bertrand Drive, Lafayette, LA.

Funeral Services will be held at 11:00 AM on March 19, 2022 in Delhomme Funeral Home Chapel of the Flowers for Bobby James Celestine, Jr., 27, who passed away on March 9, 2022. Reverend George Celestine will conduct the funeral services. Burial... View Obituary & Service Information

The family of Bobby James Celestine, Jr. created this Life Tributes page to make it easy to share your memories.

Send flowers to the Celestine, family.