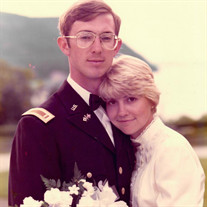 “Eye has not seen, ear has not heard, nor has it entered into the heart of man the things which God has prepared for those who love Him.” 1 Corinthians 2:9 Our precious Carol Marie Thornton crossed over to be with her Heavenly Father on December 2nd, 2019, surrounded by her loving family, at the age of 66, after a valiantly fought battle with pancreatic cancer, outliving every statistic she was given and proving to herself and to the world that faith and determination are bigger than any disease. She leaves to cherish her memory, her loving and devoted husband, William Thornton; two daughters, Kristen Stelly and her husband Ryan Stelly and Kathleen Bueche and her husband Benjamin Bueche and their son, Garrett Bueche; two grandchildren, grandson Charles Savage and his girlfriend Melissa Watson, and granddaughter Sommer Savage. She was preceded in death by her mother, Jeanne Helsely Granstaff, that she loved and cared for until March 30th of this year; her father, Charles Granstaff; her two brothers, Michael Granstaff and Danny Granstaff; and her beloved niece, Danielle Granstaff Pagitt. Carol was born in Louisiana, but lived in Texas and Alaska as her father traveled in the oil industry. She landed back in Lafayette, where she met the lucky man she would later marry and graduated from Carencro High School in 1971. She then went on to USL and studied education, where she exceled and finished in less than four years. After graduation, she moved to West Point, New York, where she and Rick were married in 1975. Being an army wife led for an exciting new marriage, where they lived in Germany for several years and had their first-born daughter. After returning to Lafayette, she began her career in the local public-school system and later became a mom of two. Carol lived all of her days courageously and lived them well, fulfilling her God-given purpose on Earth as a wonderful wife, mother, grandmother, mentor, friend and educator, changing countless lives with her love and dedication. Even after 30 years of service as a public-school teacher, retiring from Broadmoor Elementary, her passion and love for children landed her back as a kindergarten teacher at First Baptist Christian School. She was a dedicated wife and mother, who spent her entire life making sure she raised a family who knew and loved God first and foremost and made sure her kids and her husband had a solid foundation. Carol and her family are long-standing members of The Bayou Church, where she served in the children’s ministry. She was a wonderful mother to her two daughters, a fun and spunky grandmother to her two grandchildren, and a passionate and caring wife to her husband of over 40 years. Even when she became ill, she chose to live life according to God’s word, helping others with good deeds and acts of kindness. She volunteered at a local nursing home, where she and her daughter gave manicures and cared for, talked to and prayed with the residents she grew to love so much. Her testimony changed many lives and will never be forgotten. Pallbearers will be Benjamin Bueche, Charles Savage, Wayne Brunet, Dale Ducote, Austin Mikell, Garrett Bueche and Blane Granstaff. The family requests that visitation be observed at Delhomme Funeral Home at 1011 Bertrand Dr. in Lafayette, on Friday, December 6th, from 3:00 P.M. until 7:00 P.M. Visitation will continue at The Bayou Church from 9:00 A. M. until time of service on Saturday. The Celebration of Life service will be at The Bayou Church, at 2234 Kaliste Saloom Rd. in Lafayette, on Saturday, December 7th at 10:00 A.M., with a proceeding family procession to the final resting place at Lafayette Memorial Park Cemetery. As Carol wished, springtime casual attire is encouraged along with bright and bold colors. Pastor Linton Broussard of The Bayou will conduct the services. The family would like to thank Lourdes Oncology’s Dr. Adhikari and P.A. Mary Felicia Case, Dr. Joseph Herman of MD Anderson, Dr. Robert Donoway, researcher Lola Rahib and nurse Leslie Reulet-Carrere for their compassion and kindness. Carol and Rick, along with their family, are forever grateful to Pastor Linton Broussard and the care-team at The Bayou who walked with Carol and her family through this journey. In lieu of flowers, the family would like for donations to be made in memory of Carol to the Pancreatic Cancer Action Network that has helped her family in many ways throughout the past 19 months. To do so, please go to https://www.pancan.org/honormemorial-gifts/, where you can specify your donation in her memory, or mail it to Pancreatic Cancer Action Network at 1500 Rosecrans Ave., Suite 200, Manhattan Beach, CA 90266. "Very truly I tell you, whoever hears my word and believes him who sent me has eternal life and will not be judged but has crossed over from death to life." ... He does not come into judgment, but has passed from death to life." John 5:24 Until we meet again…. Personal condolences may be sent to the Thornton family at www.delhommefuneralhome.com. Delhomme Funeral Home, 1011 Bertrand Drive, Lafayette, LA is in charge of funeral arrangements.

&#8220;Eye has not seen, ear has not heard, nor has it entered into the heart of man the things which God has prepared for those who love Him.&#8221; 1 Corinthians 2:9 Our precious Carol Marie Thornton crossed over to be with her Heavenly... View Obituary & Service Information

The family of Carol M. Thornton created this Life Tributes page to make it easy to share your memories.

“Eye has not seen, ear has not heard, nor has it entered into...

Send flowers to the Thornton family.