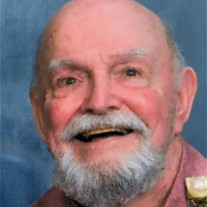 A Mass of Christian Burial will be held on Monday, December 9, 2019 at 3:00 PM in St. Mary Mother of the Church for Charles Lewis Arceneaux, Sr., who passed away on December 6, 2019. Reverend Cedric Sonnier, Pastor of St. Mary Mother of the Church, will serve as celebrant. Inurnment will take place in Lafayette Memorial Park Cemetery. Charles Lewis Arceneaux, Sr. was born the son of Edgar and Edna Arceneaux at their home in the Carencro countryside on August 25, 1931. He enlisted with the US Navy and served as an electronics technician from 1947 to 1951, training Marines for amphibious landing. After his Honorable Discharge, Charlie earned a degree in education from Southwestern Louisiana Institute, now UL-Lafayette, specializing in physical education, and then began a teaching and coaching career, coaching basketball and most other sports at Northside High School. He left education to begin a second career as a Mud Engineer. In his final career, he served as a Lafayette Parish Deputy Sheriff for twenty-three years. Charlie is survived by his loving wife of 60 years, the former Barbara Beadle. He and Barbara enjoyed traveling and spending as much time as possible with their children; William “Biff”Arceneaux and his wife, Connie, Charles “Chuck” Arceneaux, Jr. and his wife, Tracy, and Bess A. Trahan and her husband Jay, and their grandchildren; Leah Arceneaux, Paul Arceneaux, Charles “Chaz” Arceneaux III, Courtney Arceneaux, Chanel Arceneaux, Bess Trahan Stephenson and her husband, Kyle and Alexander Trahan; and two great-grandchildren, Alice and Andrew Stephenson. Also surviving Charles are his siblings, Aline Arceneaux, Edna “NaNa” Wheeler, Francis Arceneaux and Suzanne Ambler. Charles was preceded in death by his parents; his siblings, Lucille Arceneaux, Irma “Motsy” Gauthier, Richard Arceneaux, Donald Arceneaux, Pat Arceneaux, Edgar Arceneaux, Jr., Robert Arceneaux and Doris Begneaud. The family requests that visiting hours be observed at Delhomme Funeral Home - Bertrand on Monday, December 9, 2019 from 10:00 AM until 2:30 PM. A Rosary will be recited at 1:00 PM at the funeral home. In lieu of flowers, the family requests that donations be made, in honor of Charles Arceneaux, to the Wounded Warrior Project at woundedwarriorproject.org/donate.

The family of Charles L. Arceneaux Sr. created this Life Tributes page to make it easy to share your memories.

A Mass of Christian Burial will be held on Monday, December 9,...

Send flowers to the Arceneaux family.