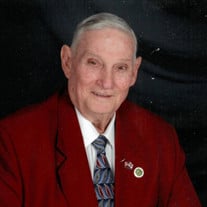 Funeral Services will be held at 1:00 PM on Friday, January 22, 2021, in Delhomme Chapel of the Flowers for Charles "Buddy" Elvin Guidry, Sr., 88, who passed away on January 19, 2021. Fr. Cedric Sonnier, Pastor of St. Mary Mother of the Church Catholic Church, will serve as Celebrant and will conduct the funeral services. Burial will take place in Lafayette Memorial Park Cemetery. Mr. Guidry, a resident of Lafayette, was the son of the late Elvin Guidry and the former Clothilde Thevenet. Though born in Breaux Bridge, Buddy graduated from Catholic High School - Baton Rouge, class of 1950. He then went on to LSU, joining the ROTC and also playing football at LSU for 2 years. Buddy joined the US Army following college, serving during the Korean Conflict and then transferring to the US Army Reserves. He eventually retired from the US Army Reserves at the rank of Lieutenant Colonel and went on to become the State President of MOAA (Military Officers Association of America). Buddy worked for the City of Lafayette for 28 years and retired as the Superintendent of Waste Water and Sewage. Buddy was always involved in many organizations. He served in LHSAA as a football official for over 20 years and also served as the President of MAPEL FCU. Buddy was a founding member of St. Mary's "Suga Bees" cooking club. He loved traveling, cooking, fishing and camping with family and friends. He is survived by his children, Charles "Chuck" E. Guidry, Jr (Kris), James R. Guidry (Phyllis), Bryon M. Guidry and Karen G. Deskin (Brian); grandchildren, Grant Guidry, Stephan Guidry (Lauren), Christina Guidry, Emily Deskin, Ashley Deskin, Danielle Miller Ewing (Philip) and Katy Miller Russell (Ben); and sister, Jacqueline "Jackie" Guidry O'Quinn. He was preceded in death by his wife of 47 years, Geraldine Roy Guidry; parents, Elvin and Clothilde Guidry; and brother-in-law, Frank M. O'Quinn. The family requests that visiting hours be observed at Delhomme Funeral Home - Bertrand on Friday, January 22, 2021, from 10:00 AM to 12:45 PM. Pallbearers will be Charles "Chuck" Guidry Jr, James Guidry, Bryon Guidry, Brian Deskin, Grant Guidry and Stephan Guidry. In lieu of flowers, the family requests donations be made to Wreaths Across America or the Susan G. Komen Foundation. Personal condolences may be sent to the Guidry Family at www.delhommefuneralhome.com. Delhomme Funeral Home, 1011 Bertrand Drive, Lafayette, LA is in charge of funeral arrangements.

Funeral Services will be held at 1:00 PM on Friday, January 22, 2021, in Delhomme Chapel of the Flowers for Charles "Buddy" Elvin Guidry, Sr., 88, who passed away on January 19, 2021. Fr. Cedric Sonnier, Pastor of St. Mary Mother of the Church... View Obituary & Service Information

The family of Charles "Buddy" Elvin Guidry Sr. created this Life Tributes page to make it easy to share your memories.

Send flowers to the Guidry family.