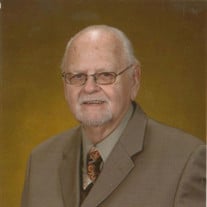 It is with deep sorrow that the family of Charles Barry Wren, Sr. announce the passing of their loved one on March 11, 2020. Born January 11, 1940 in Opelousas, Louisiana, Charles grew up in Erath where, after graduating from high school, he joined the military in 1959 and worked as a cook. It was during leave in January, 1963 that he attended church in Abbeville with his parents and met the love of his life, Isabel Elaine Lebaron. They were married three days later and moved to South Carolina where he was stationed. Charles received an honorable discharge from the Air Force in October 1963 having achieved the rank of Airman First Class. Charles would go on to have a long career as a Minister of Music serving in churches in Lafayette, Alexandria, New Iberia, and Northern Georgia, interspersed with careers in Life Insurance and Retail Sales. After retiring from the ministry and sales, Charles worked for Avis Rent-A-Car transporting vehicles to various locations in Louisiana and Mississippi until his final retirement in 2019. Charles loved singing, fishing and traveling. He and Isabel spent many years going on Mission Trips all over the world with the church. He was a devoted husband, father, grandfather and great-grandfather who will be greatly missed by many. He is survived by four children, Rhonda Wren of Lafayette, Louisiana, Melony Wren Tupper and her husband Patrick of Rayne, Louisiana, Charles Wren II and his wife Cheryl of Beech Island, South Carolina, Andrew Wren and his wife Ashley of Beech Island, South Carolina, seven grandchildren, Joseph Culotta and his wife Sarah Anne of Duson, Louisiana, Ashley Culotta Criswell and her husband Charles of Maurice, Louisiana, Logan Culotta and his finance’ Lydia Primeaux of Maurice, Louisiana, Addison Wren, Christopher Wren, Drew Wren and Chandler Wren of Beech Island, South Carolina, one great-grandchild, Kalie Culotta of Duson, Louisiana and several beloved nieces and nephews. He was preceded in death by his beautiful wife of 56 years, Isabel Elaine Lebaron Wren, his parents,Ernest Charles Wren and Carrie Richards Wren of Erath, Louisiana, and one sister, Muriel Mayhew of Lexington, Kentucky. The Wren family would like to give special thanks to the church family and staff of First Baptist Church of Lafayette for their many years of support. Personal condolences may be sent to the Wren family at www.delhommefuneralhome.com. Delhomme Funeral Home, 1011 Bertrand Drive, Lafayette, LA, is in charge of funeral arrangements.

It is with deep sorrow that the family of Charles Barry Wren, Sr. announce the passing of their loved one on March 11, 2020. Born January 11, 1940 in Opelousas, Louisiana, Charles grew up in Erath where, after graduating from high school, he... View Obituary & Service Information

The family of Charles Barry Wren Sr. created this Life Tributes page to make it easy to share your memories.

It is with deep sorrow that the family of Charles Barry Wren,...

Send flowers to the Wren family.