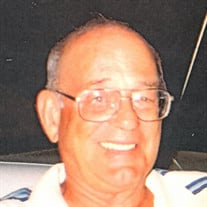 A Memorial Service will be held at 6:00 PM on Friday, December 27, 2019 in Delhomme Chapel in Scott for Claude Martin Begnaud, Sr., 82, who passed away on December 20, 2019. Burial will take place in Sts. Peter and Paul Cemetery at a later date. Claude was a U. S. Air Force Veteran having served his country from 1954 to 1957. Upon completion of his military duty he enrolled at U. S. L., graduating with a degree in Civil Engineering. After graduation he went to work for Texaco, Inc., in the New Iberia District for ten years. He worked the Houma District for ten years. While in the Houma District, he went on loan to Texaco International and worked for a time in Angola and Nigeria, Africa. From the Houma district, he went to work in the New Orleans district and was there until his retirement in 1992. He was a past member of the Louisiana Engineering Society, American Society of Civil Engineers, Louisiana Professional Land Surveyors, Lafayette Senior Men's Golf Association, Knights of Columbus, Teurlings Council, Our Lady of Fatima K.C., Houma St. Bernadette K.C., and Luling K.C. Claude, a native of Scott and a resident of Lafayette, was the son of the late Ferdinand Begnaud and the former Ethel Comeaux. He is survived by one son, Claude Martin Begnaud, Jr. and his wife, Tiffany of Breaux Bridge, two daughters, Camille Begnaud of Lafayette, and Claire Falgout and her husband Chad of Richmond Hill, GA; five grandchildren, Coen and Ella Begnaud; Jeanne, Gabrielle and Sylvie Falgout; siblings, Bennett Begnaud, Mary Begnaud, Noemi Begnaud, Barbara Bourque and Don Begnaud. He was preceded in death by his parents; wife, Doris Angelette Begnaud; sister, Regina Benoit, and one grandson, Christopher Begnaud. The family requests that visiting hours be observed at Delhomme Funeral Home - Scott, on Friday, December 27, 2019 from 3:00 PM until time of service. Personal condolences may be sent to the Begnaud family at www.delhommefuneralhome.com. Delhomme Funeral Home, 705 Marie Street, Scott, LA is in charge of funeral arrangements.

A Memorial Service will be held at 6:00 PM on Friday, December 27, 2019 in Delhomme Chapel in Scott for Claude Martin Begnaud, Sr., 82, who passed away on December 20, 2019. Burial will take place in Sts. Peter and Paul Cemetery at a later... View Obituary & Service Information

The family of Claude Martin Begnaud Sr. created this Life Tributes page to make it easy to share your memories.

A Memorial Service will be held at 6:00 PM on Friday, December...

Send flowers to the Begnaud family.