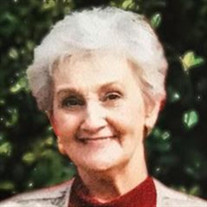 Constance Kakavecos Riggs, age 92, passed away July 8, 2020 in Lafayette, LA. A memorial service will be conducted online on August 8, 2020 at 9:45 a.m. eastern time. The Reverend Don Kakavecos will preside. Links and details can be found at www.sites.google.com/site/drriggsnewsite/Home/connie-riggs. Connie grew up in Indianapolis, Indiana, the daughter of a Greek Immigrant. She began her career as a secretary at Inland Container and rose up the ladder through several other prominent construction and development firms, including Hatfield Electric. She worked for seven years at St Vincent’s Hospital in Indianapolis in the Radiology Department and served as interim medical director. Connie moved to Crawfordsville, IN in 1971 to work for the president of Wabash College, Dr. Thaddeus Seymour. Two of her sons attended there as well. Some will recall her children's book Sam Shue and the Seven Satchels from that time. Many may remember her champagne brunches at 'Lady Bug Hill.' Many more will remember her column “Grub Street” in the Crawfordsville Journal-Review and her compilation of local history published as Montgomery County Remembers. In 1978, Connie moved to Terre Haute, IN to accept a position at Saint Mary-of-the-Woods College. She loved the college and the sisters, and she completed her own B.A. there - Class of 1975. Her last working decade began with Rollins College in 1979. She was among several Wabash staff members summoned when Seymour became Rollins' 12th president. She may be remembered not just for her enthusiastic presence outside his office, but for her local theater roles and her weekly “Thursday's Child” column in the Winter Park Outlook. She made many friends there and loved the college and Winter Park. Her son Cary graduated from Rollins. Connie stepped away from her full-time career in 1989 to live and travel with her USMC daughter and son-in-law, Connie and Michael Reep, accompanying them at duty stations in San Diego, CA and Okinawa, Japan. Following their own retirements, she moved with them to St. George, Utah and Colorado Springs, CO, before finally settling down in St. Augustine, FL in 1998. She enjoyed a full and busy life in St Augustine with many visits from extended family and friends and moved to Louisiana in 2018 to live with her son Cary and his wife Bettye in Hammond. Her last move was to The Blake of Lafayette, LA, near her son Jeff and his wife Colin, where she continued to live independently until her passing. Connie thrived at The Blake - making it a personal challenge to stay active and engaged. She delighted in hosting her weekly lunches and special event and holiday dinners with her son, daughter-in-law, and grandchildren in The Blake’s wonderful dining rooms – and was always dressed for the occasion. As she had always done, Connie continued “discovering” new things and people and came alive as she recounted visits and shared stories with her newly found friends, their social events, field trips, yoga classes and even margarita parties. Connie was preceded in death by her parents James Eustace Kakavecos and Dorothy Amelia Boren, and her five siblings: Eileen, Ruth Mary, Jimmy, Gina and Kate. She was also preceded in death by her daughter Yvonne Denise Rench, her son James Cary Riggs and her grandson, Wesley James Kakavecos. She is survived by two daughters: Vicki Catherine Riggs and Constance Amelia Reep, four sons: Ken Roger Riggs, Jeffrey Allan Riggs, Rex Donald Kakavecos, Randall Joseph Fellmy, and her large extended family. She took great joy in her 15 grandchildren and 17 great-grandchildren, as well as many nieces and nephews, to whom she still enjoyed sending birthday cards each year – with a dollar tucked inside! Thank you to Delhomme Funeral Home, 1011 Bertrand Drive, Lafayette, LA for handling funeral arrangements. Personal condolences may be sent to the Riggs family at www.delhommefuneralhome.com. Details and directions to view the memorial service may be found www.sites.google.com/site/drriggsnewsite/Home/connie-riggs. Memorial donations may be sent to: Saint Mary of the Woods College - https://giving.smwc.edu Franklin College - https://franklincollege.edu/giving/give-now Altrusa - https://altrusa.org/foundation/

Constance Kakavecos Riggs, age 92, passed away July 8, 2020 in Lafayette, LA. A memorial service will be conducted online on August 8, 2020 at 9:45 a.m. eastern time. The Reverend Don Kakavecos will preside. Links and details can be found at... View Obituary & Service Information

The family of Constance Kakavecos Riggs created this Life Tributes page to make it easy to share your memories.

Send flowers to the Riggs family.