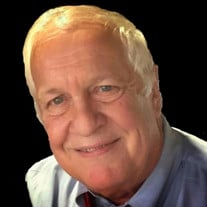 Dale Edwin Shank, born August 23, 1949, passed away on Saturday, November 6th at Maison de Lafayette Assisted Living Facility, shortly after his 72nd birthday, his 50th wedding anniversary, and the birth of his first grandchild. The first of two children, he was born to Enos Glendon and Mildred Elizabeth Shank in Harrisonburg, VA, where he attended Turner Ashby High School and Eastern Mennonite University before leaving school to do mission work in South America. Always fascinated with the Spanish language, Dale became fluent before moving to the small mountain village of Chayanta, Bolivia in 1971, where he lived among the Quechua people. He met his wife, Nola Elena Ramallo in the nearby city of Santa Cruz and they were married later that year. Shortly after, Dale and Nola returned to Virginia where Dale finished his education with a marketing degree from James Madison University. In 1975, they settled in Lafayette, Louisiana, where Dale began his oilfield career. He spent many years working on offshore oil platforms with MI Swaco before becoming involved in product development with Drillchem and Newpark. Through his position at Newpark, Dale was able to travel to various states within the U.S., as well as Canada, England, Brazil, and Australia. His work also blessed him with many lifelong friends. After a long and fulfilling career, Dale retired in 2015. Dale was a talented artist, with a large collection of pen and ink sketches of Louisiana’s wetlands, as well as oilfield-related comic strips and cartoons. He was also an avid photographer, craftsman and woodworker, and built various pieces of furniture for his home. Dale is preceded in death by his father, who passed away at the age of 92 in 2018. Dale is survived by Nola, his loving and devoted wife of 50 years; his proud and grateful son, Taylor (with his wife, Jennifer, and their daughter, Charlotte); his mother, Mildred; and his brother, Jerry (with his wife, Ellen). In remembrance, appreciation, and celebration of his life, a memorial service will be held at 3:00 PM, Monday November 15th at Delhomme Funeral Home in Lafayette. Visitation will precede the service, from 1:00 PM - 3:00 PM. His remains will rest at the Fountain Memorial Cemetery in Lafayette. Dale’s family profoundly thanks the staff of Hospice of Acadiana for the remarkable attention, care and comfort they provided him during the final months of his life. Mr. Shank and his family were cared for and entrusted final arrangements to Delhomme Funeral Home in Lafayette. Personal condolences may be sent to the Shank family at: www.delhommefuneralhome.com

The family of Dale Edwin Shank created this Life Tributes page to make it easy to share your memories.

Send flowers to the Shank family.