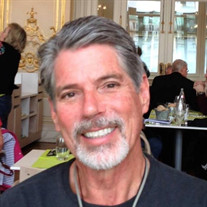 Memorial Services will be held at 1:30 PM on Wednesday, May 4, 2022 in Delhomme Funeral Home - Lafayette for Daniel David Hitchcock, 71, who passed away on April 29, 2022 at his residence. Mr. Hitchcock, a resident of Lafayette, was the son of the late Harold Hitchcock and the former Marie Ange Bonenfant. Dan was raised and educated in Stamford, New York, by parents who had lived through the Great Depression and the ravages of WWII in Europe. His mother, Marie, a French war-bride and his father, Harold, one of 10 children and a WWII veteran, were no strangers to hard work. Dan and his sister, Evelyne, learned the value of community involvement and a tireless work ethic from Harold and Marie. Dan’s formal education began at Canisius College in Buffalo, NY. He would receive an Associate’s Degree from SUNY-Cobbleskill, NY, and a Bachelor of Science in Psychology from SUNY-Brockport, NY. His education in carpentry was less formal and would last a lifetime. As a young man, Dan was an eager student of the trade and learned by helping others. Never intending to pursue construction as a livelihood, Dan discovered that he enjoyed carpentry and wood working and that he was good at it. Dan’s good nature and tireless Hitchcock work ethic would serve him well as he moved from New York to Boston and, eventually, to Florida while making lifelong friends along the way. In the mid-70s, following a friend’s advice, Dan traveled to Lafayette. As Dan would tell it, “Complete strangers came up to me, gave me a beer and boiled crawfish! And, it never snows here! I’d be crazy not to stay.”, and, not being crazy, Dan stayed. Dan quickly established himself with a few very appreciative clients, who then referred ‘this nice Yankee’ to their friends and for the next 40 years, he was never without work. Dan was a Master Carpenter in the truest sense; there was nothing he couldn’t build, fix, re-purpose or, somehow, make better. While the work was always satisfying for Dan, it was the long-term relationships with the people he worked for or worked with that mattered most to him. He wouldn’t see a job as done until they were satisfied. But his proudest moments were spent with his daughters, Katie and Sarah. He cheered at every school event, helped with the “tough” math homework, took them to their first concerts, MLB games, and Broadway shows… and coached their soccer teams over 10 different seasons. His last time was as coach of the Comeaux High School Spartans soccer team, with Katie in her Senior year and Sarah as a Freshman playing for their Dad. Watching them grow, being involved in their achievements and their adventures was the crowning glory and greatest privilege of his life. Dan lived a full, beautiful life. He loved playing Scrabble with his wife, Catherine, spinning his girls around the dance floor at weddings, riding his bike around the neighborhood, discovering and discussing new books, baking his mother’s old recipes and experimenting with new ones, and spending quality time with his family, especially with his grandchildren and his great-niece. He was so greatly loved and will be so dearly missed. Rest in peace, Dan. He is survived by his wife of 17 years, Catherine Fournet Hitchcock; sister, Evelyne Hitchcock Bottorf; daughters, Katie Hitchcock Sams (Derek) and Sarah Hitchcock Langley (Lyle); step-son, Zachary Smith (Helen); step-daughter, Meaghan Smith (Dalasie Michaelis); grandchildren, Tsaiwa & Kosmo Michaelis, Vega & Jacques Smith, Mazi & Rosie Langley, and Marley Sams; nephew, Rit Bottorf (Bonnie); and great-niece, Noelle Bottorf. He was preceded in death by his parents, Harold and Marie Ange Hitchcock; aunt, Jeanne “Mimi” Bonenfant; and brother-in-law, Frank Bottorf. The family requests that visiting hours be observed at Delhomme Funeral Home - Lafayette on Wednesday, May 4, 2022 from 12:00 PM until the time of service. In lieu of flowers, the family requests that you make a donation to the Prostate Cancer Foundation at: https://www.pcf.org Personal condolences may be sent to the Hitchcock family at www.delhommefuneralhome.com Daniel David Hitchcock and his family were cared for and entrusted final arrangements to Delhomme Funeral Home, 1011 Bertrand Drive, Lafayette, LA.

Memorial Services will be held at 1:30 PM on Wednesday, May 4, 2022 in Delhomme Funeral Home - Lafayette for Daniel David Hitchcock, 71, who passed away on April 29, 2022 at his residence. Mr. Hitchcock, a resident of Lafayette, was the son... View Obituary & Service Information

The family of Dan Hitchcock created this Life Tributes page to make it easy to share your memories.

Send flowers to the Hitchcock family.