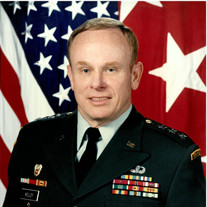 Retired Lieutenant General David Kelley died October 29, 2021, in Lafayette, Louisiana at age 77. He is survived by his sister Sheilah Kelley-Logan of North Carolina, his nephews Kevin Kelley (Anne Marie), Sean Kelley (Tiffani), Mike Kelley (Leticia), and nieces Keri Kelley Culotta (Glenn), Kristine Kelley, Kathryn Kelley, Lindsay Logan (Philip), Kimberly Logan, sisters-in law Sheila Kelley and Pam Kelley. He has many great and great-great nieces and nephews. He was preceded in death by his parents, Jim and Kitty Kelley, his brother, Steve Keley, and his nephew Eric Logan. David was born December 27, 1943, in Lafayette, Louisiana. He attended the United States Military Academy (West Point) and graduated in 1966 with a BS General Engineering degree. Upon graduation he successfully completed Airborne School and Ranger School in Fort Benning, Georgia. David was a company commander in Vietnam. After serving in Vietnam, he earned both an MS in Industrial Engineering and an MS in Computer Engineering from the University of Michigan. He graduated from the Naval War College in 1978 and from the Army War College in 1985. When David retired from the army in 2000, he was a three-star general. Later he became a vice president at Lockheed Martin in Gaithersburg, Maryland. He retired from Lockheed Martin in 2007 and returned to settle in Lafayette, Louisiana. David's distinguished academic, military, and professional record pales in comparison to the incredible legacy David leaves behind as a loving, generous man! He freely gave his time and love to both his family and his numerous friends. David had friends from his days at Lafayette High, new friends made since he retired, his years at West Point, from his many assignments as he moved around the world during his army career, and his time at Lockheed Martin. His friends quickly became part of the Kelley family, and David, just as quickly, became part of their families. David's friends could count on his friendship for life. David was the heart of the Kelley family and could always be relied upon for assistance in any situation. Family and friends also knew that time spent with David was guaranteed to be fun. David lived life to the fullest every day! He was a good man, loved by so many people. His final words on his instructions to his family were, "Please take time to pursue happiness - throw a party, and l'l be there in spirit. Smile, I've had a good ride. Love you.”

The family of David J. Kelley created this Life Tributes page to make it easy to share your memories.

Send flowers to the Kelley family.