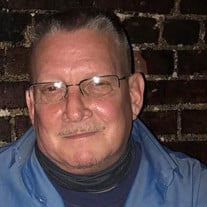 On January 22, 2021, David Alan Viator, 59, passed away at Our Lady of Lourdes Medical Center due to COVID-19 with his children near him to offer love and gratitude as he moved from this world to the next. A resident of Lafayette, David spent much of his corrections career as a prison Warden in Basile, La. His tough exterior matched what you would expect of a Warden, but he was a man who expressed love easily to his family and friends. He lived his life always choosing integrity over what was easy. He spent many hours as a coach and as a spectator on fields and courts for both his children, Cory and Fawn, for two decades. Through his time as a coach, he impacted many children’s lives by utilizing sports to teach life lessons rather than making the games just about getting the win! His most important love in his life was his beloved wife, Mona, of 30 years followed closely by his love of classic rock and Budweiser. The greatest gift he leaves his children, and his grandson is the unwavering certainty of knowing that he loved them for who they are and that love will forever endure. He is survived by his two children, Cory Viator, and his wife Madison of Mesa, Arizona and Fawn Hernandez, and her husband Justin of Lafayette, Louisiana; one grandson, Jaxson David Viator; his girlfriend, Barbara Tjoa. He was preceded in death by his father, Carrol “C.L.” Viator and his wife, Mona Viator. Pallbearers will be Cory Viator, Justin Hernandez, Lance Peltier, Scotty Hebert, Jose Sanchez, Johnny Stritzinger, Bill Lejeune (honorary), and Pat Thibodeaux (honorary). In lieu of flowers, please donate to Keaton’s Kindness Foundation (www.kclubkindness.org) which was started by Keaton Barron, the son of a friend of Fawn’s, when he was battling, and ultimately, succumbed to pediatric cancer. The organization’s goal is to continue Keaton’s mission of kindness, courage, compassion, and caring while fighting for a cure for pediatric cancer so that no child has to suffer as Keaton did and no family has to lose a precious son or daughter. Personal condolences may be sent to the Viator family at www.delhommefuneralhome.com. Delhomme Funeral Home, 200 Chief H. Fred Road, Maurice, LA is in charge of funeral arrangements. Deacon Cody Miller will conduct the funeral services and the burial will take place in St. Joseph Church- Milton, Mausoleum. For information on the visitation and service please visit www.risingfawnblog.com

On January 22, 2021, David Alan Viator, 59, passed away at Our Lady of Lourdes Medical Center due to COVID-19 with his children near him to offer love and gratitude as he moved from this world to the next. A resident of Lafayette, David... View Obituary & Service Information

The family of David Alan Viator created this Life Tributes page to make it easy to share your memories.

Send flowers to the Viator family.