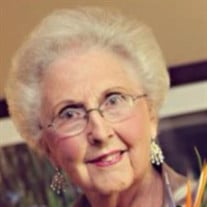 The light that shined so brightly for 97 years is now an eternal flame in the hearts of the family and friends of Delois Landry Gest, a resident of Sugar Land for the last 20 years and a native of Lafayette. A woman who answered to many names during her life – Delois, Dee, Toot, Mom, Grandma, and, finally, GG (for Great Grandma) – Delois was born the third and last child of Elena Babineaux Landry and Alibe Landry on June 28, 1924, in Lafayette, Louisiana. She was an outstanding student and graduated from Lafayette High School at the age of 14, at that time the youngest graduate of Lafayette High. She married the only man she ever loved, Fred S. Gest, Jr. on September 7, 1946, upon his return from serving in the U.S. Army as a combat infantryman in the Pacific Theater. They were married at St. Genevieve Catholic Church in Lafayette. Delois and Fred had two children, Susan, and David, on May 22, 1949, and May 22, 1953, respectively. The family was a small one but the love that abounded was deep and sincere. Delois and Fred – it’s hard to think of one without the other – were devoted members of Our Lady of Fatima Catholic Parish and raised their children in the Catholic faith. Delois worked as an employee of the Social Security Administration for a number of years before taking a break to raise her children. Deciding it was in the family’s best interest to resume working outside of the home, Delois joined SLEMCO in Lafayette as an Executive Secretary in 1963 and worked with great dedication until her retirement in 1983. Her family life was devoted in large part to her children. She volunteered at various times as a room mother at Our Lady of Fatima, as a Cub Scout Den Mother, and in a number of other volunteer positions relating to Fatima. Toot and Fred had many close friendships over the years they were married and many interests, most notably fishing in the Atchafalaya Basin, doting on their grandchildren, and playing bouree’ with friends and neighbors. Susan ultimately moved to Sugar Land, Texas where she met and married William “Bill” Wallace in 1975 and David and his wife Linda Preis Gest, also married in 1975, relocated to College Station, Texas in 1992. One of her favorite passions was watching and following the Houston Astros. She spoke excitedly about every game and her favorite player, by far, was Jose Altuve. For many years, her birthday celebration was held at Constellation Field cheering on the Sugar Land Skeeters, highlighted by her throwing out the first pitch on her 90th birthday! She was an avid reader and read hundreds of books. She loved to play BINGO and was a winner as often as not! She enjoyed a cold Dr. Pepper regularly, especially after mowing her lawn – something she did until her late 80s. She also loved two other things – to hang clothes on the clothesline, and to iron all of her clothes! Her life was all about her family, friends, and living her life on her own terms. After Fred’s death in 2002, Delois bought a home in Sugar Land near Susan and lived there very happily until moving to independent living in 2019. She is survived by daughter Susan Gest Wallace and her husband Bill, both of whom comforted her and made her a big part of their lives. She is also survived by son David Gest and his wife Linda who loved her dearly. She was blessed to be the grandmother of Ryan Wallace and his wife, Jenny, Paige Talley and her husband, Schuyler, Kelly Webb and her husband, Mike, and Jessie Lee. She is also survived by a host of nieces and nephews. She had 9 great grandchildren -- Kinsey, Asher, Bryce, Landry, Cole, Duke, Case, Claire, and Davis, all of whom loved GG very much. She was predeceased by her parents, her sister Dorothea “Dot” Landry Walraven and her brother James Leroy Landry. July 25th marked the glorious day when Fred and Delois embraced in the kingdom of God again – and forever. A Memorial Service will be held on September 4, 2021, at Our Lady of Fatima. Visitation will be at 9:00 AM followed by a Rosary at 10:15 AM then a Funeral Mass at 11:00 AM. Interment will be at St. John’s Cathedral Cemetery following the funeral mass. Personal condolences may be sent to the Gest family at www.delhommefuneralhome.com. Delhomme Funeral Home, 1011 Bertrand Drive, Lafayette, LA is in charge of funeral arrangements.

The light that shined so brightly for 97 years is now an eternal flame in the hearts of the family and friends of Delois Landry Gest, a resident of Sugar Land for the last 20 years and a native of Lafayette. A woman who answered to many names... View Obituary & Service Information

The family of Delois Landry Gest created this Life Tributes page to make it easy to share your memories.

The light that shined so brightly for 97 years is now an eternal...

Send flowers to the Gest family.