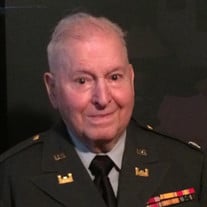 Funeral Services will be held at 1:00 PM on Wednesday, March 10, 2021, in the Delhomme Chapel of the Flowers for Don Louis Broussard, who died March 6, 2021. Interment will be in Lafayette Memorial Park Cemetery. Rev. Mario Romero will be the celebrant of the funeral and will conduct burial services. Surviving are his daughter, Susan Broussard Pellerin; his granddaughter, Lori LaHaye Broussard and her husband, John; and three great-grandchildren, Kailey, Cole and Connor Broussard. He was preceded in death by his wife of 72 years, Mildred "Millie" Barrilleaux Broussard. Mr. Broussard, 101, passed away peacefully in his sleep surrounded by family in Lafayette. Born in New Iberia to Faulinee L. “Coca-Cola Bruce” and Euphemie Nini Broussard, Don earned his B.S. in accounting from Louisiana State University in June 1941. Months later, he was designated leader of the first group drafted into Army service from Iberia Parish. After completing basic training, he was ordered to Engineer Officer Candidate School - Ft. Belvoir, VA and graduated as 2nd Lieutenant on Dec. 9, 1942. During his first assignment as Assistant Adjutant at Camp Claiborne, LA, Don was reacquainted with Mildred “Millie” Barrilleaux Broussard, a telephone operator. They married July 20, 1943, in Alexandria after Don served on active duty in North Carolina. He was separated from service March 18, 1946, as a Captain after service in Georgia, Virginia, Louisiana, North Carolina, England, France and Okinawa, Japan, with 1318 Engineer Regiment. After his service, Don was the first new hire at Shell Oil Company Area Office in New Orleans, where he served as employment office manager, president of the Shell Employees Club and manager of the company baseball and softball teams. He was an active member of the New Orleans Rose Society, where he served as president, vice president and secretary. He was called back to active duty in November 1950 for service during the Korean War. Don served as Adjutant and Executive Officer, 317 Engineer Combat Battalion, Post Adjutant, Ft. Campbell, Ky., Chief of Administration, Japan Construction Agency, Tokyo. He later returned to Shell Oil, but continued his service with the Army Reserve Corps until retiring Oct. 14, 1979, at the rank of Lieutenant Colonel. Don was a salesman with Brown and Bigelow, Pitney-Bowes, Friden Business Machines, when he moved to Lafayette. He also owned and operated his namesake business, Don Broussard Calculators, from 1979 to 1982. In addition to his life of service, Don is best remembered as a warm man who loved barbecuing with his wife and family for Sunday lunches, scouring his library and sharing memories over bourbon and water. He was dearly loved by all who knew him and will be dearly missed. The family requests that visiting hours be observed at Delhomme Funeral Home - Bertrand on Wednesday, March 10, 2021, from 11:00 AM until the time of service. In lieu of flowers, the family requests donations be made to Hospice of Acadiana. The family would like to thank his caregivers: Rondall Gumbs, Brenda Gumbs and Tiffany Walker. Personal condolences may be sent to the Broussard Family at www.delhommefuneralhome.com. Delhomme Funeral Home, 1011 Bertrand Drive, Lafayette, LA is in charge of funeral arrangements.

Funeral Services will be held at 1:00 PM on Wednesday, March 10, 2021, in the Delhomme Chapel of the Flowers for Don Louis Broussard, who died March 6, 2021. Interment will be in Lafayette Memorial Park Cemetery. Rev. Mario Romero will be the... View Obituary & Service Information

The family of Don Louis Broussard created this Life Tributes page to make it easy to share your memories.

Funeral Services will be held at 1:00 PM on Wednesday, March...