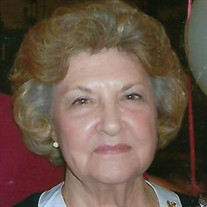 A Mass of Christian Burial will be held at 10:00 AM on Friday, July 17, 2020 at The Cathedral of St. John the Evangelist for Dorothy Ritchey, 95, who passed away on July 14, 2020. Reverend Andrew Schumacher will serve as Celebrant of the Mass and will conduct the funeral services. Burial will take place in Calvary Mausoleum. Dorothy, a resident of Lafayette, was the daughter of the late Raoul O'Fleurty and the former Winnie Martin. Dot graduated from Lafayette High School in 1941. She began her career as a telephone operator and then went on to serve for 26 years as a court clerk with the Lafayette Parish Clerk of Court’s Office. She was also an employee of the Lafayette Sheriff’s Department Tax Office. She was a faithful member of The Cathedral of St. John the Evangelist, serving as a Eucharistic Minister and as a member of the St. Ann’s Society. She also served as President of Alpha Iota 1006 and Epsilon Sigma Alpha. She is survived by her children, John Donlon Ritchey, Jr., James Daniel Ritchey (Vickie), Brian Martin Ritchey (Darlene), Scott Alan Ritchey (Marseille), Jay Barry Ritchey, and Lori Anne Clouse (Ralph); her grandchildren, Bradley May, Summer Ladner, Jonathan Ritchey, Cody Ritchey, Trevor Ritchey, Bailey Ritchey, Ethan Ritchey, Olivia Guillot, Dillon Clouse, Madison Clouse, Anabella Ritchey, Donlon Gage Ritchey and Jacob Ritchey; and eleven great-grandchildren. She was preceded in death by her beloved husband of 42 years, John Donlon Ritchey; her son, Christian Ritchey; her parents, and her brother, Alvin O’Fleurty. The family requests that visiting hours be observed at Delhomme Funeral Home - Bertrand on Thursday, July 16, 2020, from 2:00 PM to 8:00 PM. A Rosary will be recited at 6:00 PM on Thursday evening in the funeral home. Visiting hours will continue on Friday from 8:00 AM to 9:30 AM. Pallbearers will be Bailey Ritchey, Anabella Ritchey, Madison Clouse, Trevor Ritchey, Ethan Ritchey, Jacob Ritchey, Kai Clouse and Gage Ritchey. The family would like to extend special thanks to Famika Huntsberry, mom’s devoted caregiver, Shirley McCoy, mom’s Eucharistic Minister for the past five years, and to the compassionate staff of Lourdes Hospice. In lieu of flowers, memorial contributions may be made, in Dot Ritchey’s name, to Hospice Promise Foundation, 901 Hugh Wallis Road South, Lafayette, LA 70508. Personal condolences may be sent to the Ritchey family at www.delhommefuneralhome.com. Delhomme Funeral Home, 1011 Bertrand Drive, Lafayette, LA is in charge of funeral arrangements.

A Mass of Christian Burial will be held at 10:00 AM on Friday, July 17, 2020 at The Cathedral of St. John the Evangelist for Dorothy Ritchey, 95, who passed away on July 14, 2020. Reverend Andrew Schumacher will serve as Celebrant of the Mass... View Obituary & Service Information

The family of Dorothy "Dot" Ritchey created this Life Tributes page to make it easy to share your memories.

Send flowers to the Ritchey family.