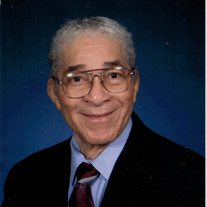 Funeral services celebrating the life of Edward Hugh Pollock will be held at Delhomme Funeral Home, and interment will be at St. John Cathedral Cemetery in Lafayette, Louisiana. Edward was born on August 25, 1928 to Edward Benjamin Pollock and Lucille Busby Pollock. He answered the call to the Lord at the age of 92 on Sunday, November 29, 2020, at Tranquility at Kennesaw Mountain surrounded by his loving family. Edward was a native of Chicago, Illinois and grew up on the Southside of Chicago. Ed began his education with the Chicago Public Schools. Later, he enrolled at Roosevelt University, but interrupted his studies to join the army during WWII. Following an honorable discharge, he resumed studies and received a Bachelor and Master’s degree in Education from Western Michigan University in Kalamazoo. He was deeply committed to education and devoted many years to teaching in various elementary, middle and high schools of Chicago. He also served as Principal at a Catholic elementary school. During summer months, he taught high school and trained Vista volunteers. In 1976, Ed accepted a position at the University of Southwestern Louisiana (University of Louisiana at Lafayette), where he became a counselor and teacher with the Upward Bound Program. He held this position until his retirement. Ed was a lover of music and played the piano from childhood. He exhibited a love of jazz, fostered by his father who was a professional jazz performer. As an adult, he was a choir member at St. Felicitas Catholic Church in Chicago, as well as at St. Pius X in Lafayette. He also enjoyed singing in The Chicago Apollo Chorus. He was a founding member of Chorale Acadienne in Lafayette and a member of Kappa Alpha Psi. He enjoyed traveling and often took his family on road trips. He loved his family, devoted his life to them and fostered the spiritual and academic well-being. Edward was formerly married to Joyce Lavergne Gravitt Pollock and had two children, Bradley Hugh Pollock and Kimberly Joyce Pollock. Following Joyce’s death, he married Ursula Malveaux Hammond Pollock, who had three children: Elise Marie Tolson, Angelle Gerette Hammond and Marcel Gerard Hammond. The families were united and became one happy family. Edward is survived by his wife, Ursula Malveaux Pollock; children, Kimberly Joyce Pollock, Elise Marie Tolson and her husband, Herschel, Angelle Gerette Hammond and her husband, Anthony Peoples, Marcel Gerard Hammond and his wife, Sreyya; sisters-in-law, Beverly Boykins and Nathalie Alsandor; brother-in-law, Kenneth Malveaux; and six granddaughters, Angelle Beltran and her husband Jonathan, Katya Schexnaydre, Corin St. Julien, Jade Tolson, Ajia Robinson, and Hailii Hammond; and great-grandchildren, Elijah and Noa Beltran. He is also survived by his cousins, Leon Rabouine, Georgianna McKinney and her husband, Sheldon; Courtney Bethel Purnell and her husband, James, and Allison Bethel Victorian, as well as a host of nieces and nephews. Preceding Edward in death were his parents; his first wife, Joyce Lavergne Gravitt Pollock; his son, Bradley Hugh Pollock and his sister, Natalie Fern Lyle. Serving as pallbearers are Gary Alsandor, Speedy Lappin, Courtney Prevost, Ralph Schexnaydre, Stephen Stewart, and Norbert St. Julien. Honorary pallbearers will be Craig Alsandor, Gerald Alsandor, Jonathan Beltran, Darryl Boykins, Anthony Peoples, Larry Poirrier, Mark Robinson and Herschel Tolson. Personal condolences may be sent to the Pollock Family at www.delhommefuneralhome.com. Delhomme Funeral Home, 1011 Bertrand Drive, Lafayette, LA, is in charge of funeral arrangements.

Funeral services celebrating the life of Edward Hugh Pollock will be held at Delhomme Funeral Home, and interment will be at St. John Cathedral Cemetery in Lafayette, Louisiana. Edward was born on August 25, 1928 to Edward Benjamin Pollock... View Obituary & Service Information

The family of Edward Hugh Pollock created this Life Tributes page to make it easy to share your memories.

Send flowers to the Pollock family.