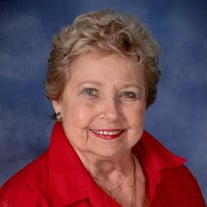 Mary Elaine Louviere Mann, fondly known as “Tootsie”, died peacefully at her home on Easter Sunday, April 4, 2021. Elaine was born on January 22, 1932 in Lafayette, Louisiana, and was 89 years old. After graduating from SLI (now the University of Louisiana at Lafayette), she married her high school sweetheart Louis B. Mann and started their family. Elaine was the founder of the Elaine L Mann School of Dance and continued to teach children in the Lafayette area for the next 40 years. She eventually expanded her school to include locations in Abbeville, Rayne, Breaux Bridge and Youngsville. She was a founding member of the Dixie Dance Masters, a three-state chapter of the prestigious Dance Masters of America, serving as its first president and as a delegate on the National Board several times. She was a founding member of the Krewe of Attakapas where she was still active on the board of directors at her death and was honored to serve as their Captain for 20 years. She reigned as Queen Karakondye L for that momentous anniversary. She was a Trailblazer honoree for Women Who Mean Business. She was a longtime Junior League of Lafayette member and sustainer. She was an active member of St Mary Mother of the Church since its inception. Elaine is survived by her four children, Lisa M Breaux, and husband, Michael A; Leslie M Sandlin, and husband, Jimmy; Louis Benjamin Mann, Jr, and wife Sudie; David M Mann, and wife Sandy; 10 grandchildren Matthew Breaux (Megan), Ainsley King (Nick), Kirby Schroeder (Scot), Shelby Sandlin-Jewell (Davey), Maxwell Sandlin (Mallory), Marks Mann, Haughton Mann, Taylor Mann, Jenya Mann, and Misha Mann, and 7 great grandchildren; and sister-in-law Carol Mann Marcotte. She was predeceased by her husband, Louis Benjamin Mann; her parents Larry Joseph and May Church Louviere; her brother, Larry T Louviere; and sister-in-law, Beverly L Daspit; and brother-in-law, Russell H Mann. The family requests visitation from 10:00 a.m. to 12:00 noon until the funeral mass at 12:00 noon on Saturday, April 10, 2021 at St Mary Mother of the Church, 419 Doucet Road. Longtime friends, Fr. Hampton Davis, along with con-celebrants, Fr. Howard Blessing and Fr. Cedric Sonnier, will serve as celebrant and will conduct the funeral mass. Burial will follow at Holy Mary, Mother of God Cemetery, with Fr. Cedric Sonnier presiding. Family members and friends who are unable to attend may view the funeral service via live-stream at www.stmarych.com. Honored to serve as pallbearers are her 6 grandsons: Matthew Andre Breaux, James Maxwell Mann Sandlin, Louis Marks Mann, II, Richard Haughton Mann, Jenya Joseph Mann, David Mikhail Mann. Honorary pallbearers L C Cambre, and her morning church breakfast group. The family wishes to express their sincere gratitude for the compassionate care given to Ms Elaine by Mary Ryan, Anna Broussard, Monica Hills and Betsy Mitchell, along with Hospice of Acadiana. In lieu of flowers the family requests donations be made to “Louis B Mann Centennial Foundation for Mechanical Engineering” at UL or Hospice of Acadiana or the charity of your choice. In keeping with current state-wide COVID-19 mandates, attendees are requested to wear masks and practice social distancing for all service-related activities. Personal condolences may be made to the Mann Family at www.delhommefuneralhome.com. Delhomme Funeral Home, 1011 Bertrand Drive, Lafayette, LA, is in charge of funeral arrangements.

The family of Elaine L. Mann created this Life Tributes page to make it easy to share your memories.

Send flowers to the Mann family.