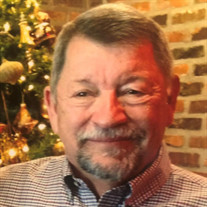 Funeral Services will be held at 11:00 AM on Monday, January 18, 2021, in the Delhomme Chapel of the Flowers for Erwin "Buddy" Webb, 72, who passed away on January 14, 2021. Rev. F. Hampton Davis, Pastor of St. Anthony of Padua Catholic Church in Eunice, will serve as Celebrant and will conduct the funeral services. Survivors include his daughter, Dana W. Otillio (Mike); two grandchildren, Lily and Ethan; his long-time lovely Clo Soares; three sisters, Marie Rouley, Sylvia Daigle and Sarah West; and one brother, Ronnie Webb. He was preceded in death by his parents, Francis and Volcie Marie Webb; brothers, Charles Webb and Thomas Webb; and sisters, Ruby Couvillion, Bootsie Breaux and Anna Domengeaux. Buddy was born in Lafayette in 1948. He served in the US Navy from 1966–1971. He received his first career break when he started working at Guaranty Bank under his mentor and life-long friend, Red Dumesnil. Buddy spent more than 40 years in banking, working at several Acadiana-area banks including Rayne State Bank, where he retired. Buddy was most proud of his civic involvement. He served in various community groups, boards and committees—in particular those which benefited the Northside where he grew up—including the Rebuild Lafayette North Committee, Kiwanis Club, Goodwill Industries, Lafayette Housing Authority, Habitat for Humanity, New Hope Community Development of Acadiana, and CODA. He received countless awards for his efforts including the Freedom Award presented by Farm Bureau Louisiana. In lieu of flowers, donations can be made to New Hope Community Development of Acadiana (by check via mail or online at newhopelafayette.org — Buddy Webb Memorial) or to the Monastery of Mary, Mother of Grace in Lafayette. The family requests that visiting hours be observed at Delhomme Funeral Home - Bertrand on Sunday, January 17, 2021 from 4:00 to 6:30 PM. A Rosary will be prayed on Sunday at 6:00 PM in the funeral parlor. Visiting hours will continue on Monday, January 18, 2021, from 8:00 AM until the time of service. Pallbearers will be Mike, Lily and Ethan Otillio. A heartfelt appreciation is extended by the family to the ICU staff on the 7th floor of Ochsner Lafayette General for their dedicated care. Personal condolences may be sent to the Webb Family at www.delhommefuneralhome.com. Delhomme Funeral Home, 1011 Bertrand Drive, Lafayette, LA is in charge of funeral arrangements.

Funeral Services will be held at 11:00 AM on Monday, January 18, 2021, in the Delhomme Chapel of the Flowers for Erwin "Buddy" Webb, 72, who passed away on January 14, 2021. Rev. F. Hampton Davis, Pastor of St. Anthony of Padua Catholic Church... View Obituary & Service Information

The family of Erwin "Buddy" Webb created this Life Tributes page to make it easy to share your memories.

Send flowers to the Webb family.