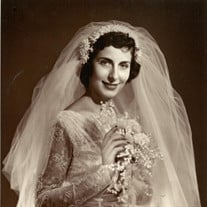 Esther Lewis McDuff departed this life on August 5, 2021, when she was called home by her Lord and Savior, Jesus Christ. Funeral services will be held Monday, August 9, 2021 at 11:00 AM in the Delhomme Chapel of the Flowers. Esther was born on October 22, 1929, in Shreveport, Louisiana to Joseph Lewis and Rosa DeStefano Lewis and was part of a large, extended Italian family, with dozens of aunts, uncles and cousins. She was preceded in death by her parents, Joe Lewis and Rosa Lewis as well as her husband, Charles Francis McDuff, her brothers, Stanley Lewis and Joe Lewis and her sister, Pamela Lewis. She is survived by her four children and their families, Charles Francis McDuff, Jr. and his wife, Faye McDuff; Joseph Haight McDuff and his wife, Lisa McDuff; William Scott McDuff and his wife, Emily McDuff; and Rose Mary McDuff Derryberry and her husband, Tim Derryberry. She is also survived by her six grandchildren, Courtney McDuff DuQuesnay and her husband, Ford DuQuesnay, Ellen McDuff Dantin and her husband, Shane Dantin, Katherine Norris, Erin McDuff Spencer and her husband, Luke Spencer and Colleen McDuff Terral and her husband, Carter Terral and son, Timothy Derryberry; and her two great grandchildren, Charlotte DuQuesnay and Ellis Terral. Having lost her mother at a very young age and her father being required to travel to oversee his businesses in three states, Esther spent her high school years as a boarding student at St. Vincent’s Academy in Shreveport, Louisiana, where she met her two lifelong best friends, Mae Levee (Abington) and Joan Puissegur (Lavigne), who were her high school roommates and college roommates at Northwestern State College in Natchitoches, Louisiana. The three friends were known as “The Three Little Virgins from St. Vincent’s”, a label they were proud to bear. Mae and Joan have also preceded Esther in death in recent years. Esther graduated from college with a degree in Home Economics and began her career in Bastrop, Louisiana with Louisiana Power and Light Company, where she worked as a Home Appliance Demonstrator, going into customers’ home to show them how to cook meals on the “new” electric stoves and ovens. While in Bastrop she met her husband, Charlie McDuff, who was drafted into the U.S. Army during the Korean War. They were stationed in Fort Lee, Virginia, where Esther went to work for the State of Virginia as a caseworker for their welfare program. It was this job that set Esther on a career path of public service, having been profoundly touched by her time working with the severely underprivileged and poor and helping them learn to make the most of the food benefit allowance afforded them. Esther began her teaching career in the mid-50’s when her first two children were toddlers, having been called in to service by the pastor of her Catholic community to teach elementary children in the Parish school. Esther went on to complete courses to gain her Louisiana teaching certificate and then earned a Master’s Degree in Early Childhood Development and completed hours towards a Ph.D. in education, all while raising a growing family. Esther is retired from the Lafayette Parish Schools System, where she spent the last 15 years of her career teaching middle school students who were struggling with reading and writing, through the Federally funded Elementary and Secondary Education Act, Title I, which was directed towards schools with a large population of disadvantaged youth. Esther loved each and every one of her students and thrilled in the retelling of stories, often with tears in her eyes, of their successes both in the classroom and then later in running into them as adults and learning of their achievements. She was as proud of each of them as she was her own children. Esther was a true lady and a wonderful mother. She never had a disparaging thing to say about anyone and there was not a biased bone in her body. She genuinely loved people for who they were. She never uttered a curse word and was beloved by her many friends. She was the consummate homemaker, creating a beautiful and loving home for her family while they were growing up and ultimately hosting huge family holidays with seeming ease and grace. Esther peacefully departed this life in her home, surrounded by loved ones, within an hour of having received the Last Rites, which brought her the comfort of the truly devout and ushered her into Heaven where she was certainly greeted with the words, “Well done, my good and faithful servant." The family requests that visiting hours begin Monday, August 9, 2021 from 9:00 AM until time of service at Delhomme Funeral Home on Bertrand Dr. Personal condolences may be sent to the McDuff family at www.delhommefuneralhome.com. Delhomme Funeral Home, 1011 Bertrand Drive, Lafayette, LA is in charge of funeral arrangements.

Esther Lewis McDuff departed this life on August 5, 2021, when she was called home by her Lord and Savior, Jesus Christ. Funeral services will be held Monday, August 9, 2021 at 11:00 AM in the Delhomme Chapel of the Flowers.... View Obituary & Service Information

The family of Esther Lewis McDuff created this Life Tributes page to make it easy to share your memories.

Send flowers to the McDuff family.