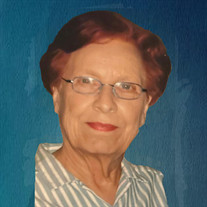 A Private Graveside Service will be held in Lafayette Memorial Park for Florence Rimkus, 94, who passed away on October 30, 2021. Florence (Flo), the youngest daughter of Joel and Fannie Fletcher, was born in Lafayette and raised near and on the campus of then Southwestern Louisiana Institute (now UL Lafayette) where her father was a teacher in agriculture and later an administrator. She had two sisters, Ellen and Lorraine, and younger brother Joel III. She made many long-time friends and had fond memories of her childhood in Lafayette. A graduate of Lafayette High School,Flo attended Montreat College in North Carolina, Southwestern in Lafayette, and the University of Arkansas where she met Charles Dupree Nevels. They were married in 1949. She had four children with Dupree: Paul, Gayle, Sandra and Ted. In 1959 while living in Houston, Dupree was killed in a tragic plane crash in Lake Pontchartrain with the youngest child only three weeks old. Flo returned to her hometown Lafayette with her four children to be near her parents. Two years later in 1961, she met and married Alvin Maurice Rimkus of Houston, Texas. Maurice soon became a father figure to the two youngest, Sandra and Ted. Maurice and Flo bought and moved to a farm in Knippa, Texas. The farm environment reminded her of her early childhood in Lafayette. They lived on the farm and in nearby Uvalde for many years, until Maurice passed away in 2017. Flo returned to Lafayette in her final years to be near her final resting place, next to Dupree and her parents at Lafayette Memorial Cemetery. She was preceded in death by her parents and two sisters, Ellen Meadors of Baton Rouge, Louisiana and Lorraine Elliott of Point Richmond, California. Flo is survived by her brother, Joel L. Fletcher III of Fredericksburg, Virginia; her children: Paul (wife Mary) Nevels of Kingwood Texas, Gayle Nevels Frick of Lake Hills Texas, Sandra Nevels of Bandera, Texas and Ted (wife Cindy) Nevels of Lafayette, Louisiana; her six grandchildren: Lindsey Turner of Nacogdochers, Texas, Katy Welch of Fort Benning, GA, Heath Nevels of Houston, Texas, Chase Nevels of San Antonio, Texas, Neil Nevels of New Braunfels, Texas, and Marissa Guidry of Lafayette. Personal condolences may be sent to the Nevels/Rimkus family at www.delhommefuneralhome.com Delhomme Funeral Home, 1011 Bertrand Drive, Lafayette, LA is in charge of funeral arrangements

A Private Graveside Service will be held in Lafayette Memorial Park for Florence Rimkus, 94, who passed away on October 30, 2021. Florence (Flo), the youngest daughter of Joel and Fannie Fletcher, was born in Lafayette and raised near and on... View Obituary & Service Information

The family of Florence Fletcher Rimkus created this Life Tributes page to make it easy to share your memories.

A Private Graveside Service will be held in Lafayette Memorial...

Send flowers to the Rimkus family.