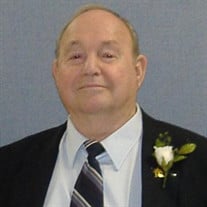 Funeral Services will be held at 11:00 AM on Monday, April 5, 2021 in Community Baptist Church for Freddie I. Saucier, 85, who passed away on March 30, 2021 at his residence. Bro. Tom Lambert, Pastor of Community Baptist Church will conduct the funeral services. Burial will take place in Southwest Louisiana State Veterans Cemetery. Fred, a resident of Lafayette, was the son of the late Narcease Saucier and the former Pearl Yawn. Though born and raised in Ponchatoula, Fred moved all around Louisiana for his work, before settling down in Lafayette. He joined the Army in 1957, and upon getting out he began working at United Gas Pipeline. Upon retiring from United Gas Pipeline in 1990, Fred enjoyed spending his time gardening, woodworking and oil-painting. As a deacon at Community Baptist Church, Fred proudly served for years. He will be dearly missed by all, especially his numerous nieces and nephews. He is survived by his wife of 62 years, Eula R. Saucier; daughters, Faye S. Hollier (Rickey) and Donna S. Cole (John); grandchildren, Nicholas Hollier (Casey Theriot) and Allison Hollier; and great-grandson, Oliver. He was preceded in death by his parents, Narcease and Pearl Mae Saucier; sisters, Anne Pennington and Edith McLendon; and brothers, Eric, Earl and Doyle Saucier. Pallbearers will be his family and friends. Personal condolences may be sent to the Saucier family at www.delhommefuneralhome.com. Delhomme Funeral Home, 1011 Bertrand Drive, Lafayette, LA is in charge of funeral arrangements.

The family of Freddie I. Saucier created this Life Tributes page to make it easy to share your memories.

Send flowers to the Saucier family.