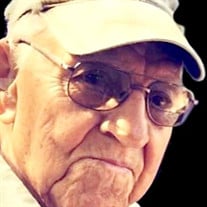 Funeral Services will be held at 2:30 PM on April 25, 2022 in Delhomme Chapel of the Flowers for Frederick "Fred" Anthony Fournet, 91, who passed away on April 21, 2022 at his home. Deacon Art Bakeler will conduct the funeral services. Burial will take place in Lafayette Memorial Park. Born in Lafayette, LA on April 24, 1930, Fred was the seventh of ten children born to Jean-Jacques and Ann Aurore Fournet. His childhood was spent on the Fournet family property on Johnston Street in Lafayette, which was at that time the outskirts of town. It was through his father’s dedication to conservation and his mother’s appreciation for nature’s beauty that Fred developed his love of the outdoors and, later, his informal study of the natural world. Fred attended Lafayette High School and later graduated from S.L.I. (now UL Lafayette) in Agricultural Management in 1954. It was soon after that Fred was commissioned an ensign in the United States Naval Reserve. He served as a Communications Officer at US Naval Station at Kwajelein in the Marshall Islands. Before his discharge as a Lieutenant Jr. Grade in 1956, Fred served as Port Control Officer at Pearl Harbor. Fred’s early work life in Food Services took him from fry cook for Burger Chef (later Mr.Cook) to its regional manager. He also spent many years with Borden’s serving as Production Coordinator in Beaumont, TX and in Lake Charles, LA. Throughout Fred’s life, his reverence for nature, its rhythms, and rules, would play out in time spent at Prairie Maronne in St. Martin Parish and ‘the camp’ in the Atachafalaya basin. The latter bringing him great joy as he would fish, hunt, and cook alongside his brothers, nephews, friends and in-laws while also managing a large vegetable garden in the basin and another at his home in Lafayette. Fred was such a successful home gardener and never one to waste, he’d offer his excess produce displayed in his driveway for anyone to partake. Fred’s family would like to offer a special thanks to Mrs. Tina Hopkins who was his caretaker and his friend. He is survived by his siblings, Anna Louise Fournet and Daniel J. Fournet. He was preceded in death by his parents; siblings, Jeanne Marie Holly, Paul Andrew Fournet, James A. Fournet, Howard Louis Fournet, Thomas R. Fournet, Robert L. Fournet, and Nellie Jane Comeaux. The family requests that visiting hours be observed at Delhomme Funeral Home - Bertrand on Monday, April 25, 2022 from 12:00 PM to 1:45 PM. A rosary will be recited on Monday at 1:45 PM. Pallbearers will be Stephan Comeaux, Brian P. Fournet, Stephen Fournet, Richard "Dickie” Bell, James F. Comeaux, and Michael Donovan. Personal condolences may be sent to the Fournet family at www.delhommefuneralhome.com. Frederick “Fred” Anthony Fournet and his family were cared for and entrusted final arrangements to Delhomme Funeral Home, 1011 Bertrand Drive, Lafayette, LA.

Funeral Services will be held at 2:30 PM on April 25, 2022 in Delhomme Chapel of the Flowers for Frederick "Fred" Anthony Fournet, 91, who passed away on April 21, 2022 at his home. Deacon Art Bakeler will conduct the funeral services. Burial... View Obituary & Service Information

The family of Frederick "Fred" Anthony Fournet created this Life Tributes page to make it easy to share your memories.

Send flowers to the Fournet family.