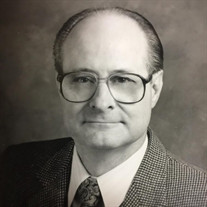 Beloved Lafayette physician, teacher, husband and father Dr. Gerald Joseph Hubbell died on July 21, 2021 due to complications from Alzheimer's Disease. He was 84. Gerald was born October 23, 1936 in Vacherie, Louisiana and grew up in the family home on the River Road, about 100 yards from the banks of the Mississippi River. He earned a music degree from S.L.I. in Lafayette (now U.L.) in 1959 and a medical degree from the L.S.U. School of Medicine in 1965. From 1966 to 1968 Gerald served as a Second Lieutenant in the United States Navy and spent the majority of 1967 as a Naval doctor stationed at the Chu Lai military base in South Vietnam. After his service Gerald completed his three-year residency at Charity Hospital of New Orleans, including a year as the Chief Medical Resident. He moved to Lafayette in 1971 and joined the Hamilton Medical Group, where he practiced oncology, hematology and general internal medicine. In 1990 he joined the L.S.U. teaching staff at University Medical Center where he remained until retirement at the end of 2013. Gerald - "Jerry" - fell in love with opera and classical music when he was 14 years old and he never looked back. Not too many years after that he fell in love with the love of his life Geraldine "Gerry" Cormier from Lacassine, Louisiana, and likewise never looked back. Jerry and Gerry - how could they miss? They married soon after their graduation from S.L.I. in 1959, united by their love of classical music. As she fostered a career playing and teaching music, he turned his attention to recording it. While stationed in South Vietnam he spent a few days in Tokyo where he bought new audio equipment and had it shipped home to New Orleans. Once he returned he began recording the Metropolitan Opera radio broadcast every Saturday afternoon, a habit he kept up until a few years into the new century, amassing over 2,000 performances saved on open reel tape. He also recorded live classical music performances at venues all over South Louisiana and provided those recordings to many a grateful performer. Jerry and Gerry moved to Lafayette in 1971 with an eye toward supporting the arts, a mission that continues to this day. Jerry served a term as president of Community Concerts and was the first president of Lafayette's choral group Chorale Acadienne. The two of them founded the Krewe of Opera Nuts Association and over the years hosted a dozen parties on Mardi Gras Day for which attendees dressed as characters from operas. They sang and made merry and even marched in makeshift parades around the neighborhood of Bendel Gardens. And when Geraldine played a recital or accompanied someone doing so, Gerald recorded it. He was an early adapter, buying new recording equipment as soon as it came out, trying everything in the continual search for the perfect recording. Again, much to the delight of countless performers. In 1982 Dr. Hubbell was named a "Friend of The Arts" by the national women's music fraternity Sigma Alpha Iota for his efforts in recording the performers at its national conventions. SAI's convention in 2012 was dedicated to Gerald and Geraldine, a lifelong SAI member. And if you ask the multitude of medical colleagues he worked with over the years many of them will tell you that the thing they remember most about him was that he was always humming to himself as he walked the halls of a hospital. He was an artist as well, and several of his paintings still adorn the walls of U.H.C., where he worked for 24 years, and Angelle Hall, the music building on the campus of U.L. - Lafayette. He is survived by his loving wife of 62 years Geraldine; son David and his children Kimberly, Angela, Christian (Zeke) and Melissa; daughter Katherine (Kitty) Credeur, her husband Timothy (Timmy) Credeur and their children Timothy (Tim), Jill and Hailey, and 21 great-grandchildren; his brother James Hubbell and his sisters Cecile Blanchard and Marie Hubbell Frilot. He was preceded in death by his parents Philip and Cecile, his older brother Philip Jr. and his younger brother Charles. The Hubbell family is most grateful for the love and care extended by the wonderful staff at Brookdale Senior Living of Lafayette and the good people of Acadian Hospice. A funeral mass will be celebrated at 11:00 a.m. on Friday, July 23, 2021 at St. Pius X Catholic Church at 600 Kaliste Saloom Road in Lafayette, with a gathering of family and friends preceding from 9:00 a.m. to 11:00 a.m. In lieu of flowers, donations may be made to The Spotlight on Dementia Foundation, Acadian Hospice, Chorale Acadienne or The Acadiana Symphony. Personal condolences may be sent to the Hubbell family at www.delhommefuneralhome.com. Delhomme Funeral Home, 1011 Bertrand Dr, Lafayette, LA is in charge of funeral arrangements.

Beloved Lafayette physician, teacher, husband and father Dr. Gerald Joseph Hubbell died on July 21, 2021 due to complications from Alzheimer's Disease. He was 84. Gerald was born October 23, 1936 in Vacherie, Louisiana and grew up in the... View Obituary & Service Information

The family of Dr. Gerald Joseph Hubbell created this Life Tributes page to make it easy to share your memories.

Send flowers to the Hubbell family.