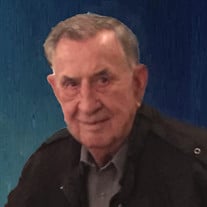 A Mass of Christian Burial will be held at 11:00 AM on Saturday, October 2, 2021 in Our Lady of Fatima Catholic Church for Gervis "Big Daddy" Frank LeBlanc, 89, who passed away on September 29, 2021 at his residence. Rev. Msgr. Jefferson J. DeBlanc, Pastor of Our Lady of Fatima Catholic Church, will be Celebrant of the Mass and will conduct the funeral services. Burial will take place in Holy Mary Mother of God Mausoleum. Mr. Gervis, a longtime resident of Lafayette, was the son of the late Robert LeBlanc and Zoe Vitte. A graduate of Arnaudville High School, Class of 1950, Gervis was a stellar athlete in basketball. He went four years All-District and three years All-State and was even offered scholarships to LSU. In 1951, Gervis was drafted into the Army - 1st Armored Division, until 1953 once the Korean Conflict ended. Gervis began his professional career in telecommunications with Bell South and retired with over 42 years of service. He enjoyed vegetable gardening, watching LSU & Saints football, fishing, playing softball with his KoC chapter, and loving on babies. Gervis was great provider, father, mentor, and friend; he will be missed by all who knew him. He is survived by his wife of 64 years, Lucille Doucet LeBlanc; sons, Eddie R. LeBlanc (Pauline), Gary J. LeBlanc, and Brent J. LeBlanc (Elaina); granddaughters, Heather LeBlanc Vannoy (Bobby) and Saralyn Anne LeBlanc; grandson, Logan J. LeBlanc; great-granddaughter, Eleanor Anne Boutin; great-grandson, Cole F. Vannoy; brother, Clebert J. LeBlanc; and one expected great-grandson, Rex D. Vannoy. He was preceded in death by his parents, Robert Joseph LeBlanc and Zoe Vitte; stepsister, Wilma Thomas; stepbrother, Allen Dohman Sr.; and sister-in-law, Rita Cacouri LeBlanc. The family requests that visiting hours be observed at Delhomme Funeral Home - Bertrand on Friday, October 1, 2021 from 4:00 PM to 8:00 PM. A Rosary will be prayed at 6:30 PM on Friday evening in the funeral home. Visiting hours will continue Saturday, October 2, 2021 from 8:00 AM until the time of service. Pallbearers will be Eddie LeBlanc, Brent LeBlanc, Logan LeBlanc, Bobby Vannoy, Glen Doucet, and Keith Hanks. The family would like to thank the nurses, staff, and doctors, with Concepts of Care Home Health & Hospice of Acadiana for the compassionate care during their time of need. In lieu of flowers, the family requests donations be made in Gervis' memory to Hospice of Acadiana. Personal condolences may be sent to the LeBlanc family at www.delhommefuneralhome.com. Delhomme Funeral Home, 1011 Bertrand Drive, Lafayette, LA is in charge of funeral arrangements.

A Mass of Christian Burial will be held at 11:00 AM on Saturday, October 2, 2021 in Our Lady of Fatima Catholic Church for Gervis "Big Daddy" Frank LeBlanc, 89, who passed away on September 29, 2021 at his residence. Rev. Msgr. Jefferson J.... View Obituary & Service Information

The family of Gervis "Big Daddy" F. LeBLanc created this Life Tributes page to make it easy to share your memories.

Send flowers to the LeBLanc family.