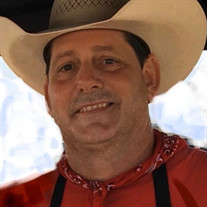 There is no doubt that when Greg&#8217;s life ended on January 29, 2020, he was quickly reunited with his daughter Hannah Callahan, who passed away 4 months ago, at age 18. Whether he got there by cowboy boots, horseback or pickup truck, he... View Obituary & Service Information

The family of Gregory Paul Arceneaux created this Life Tributes page to make it easy to share your memories.

There is no doubt that when Greg’s life ended on January 29,...

Send flowers to the Arceneaux family.