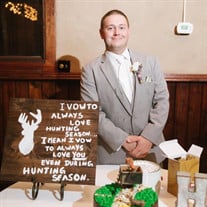 Funeral Services will be held at 1:00 PM on Friday, June 26, 2020 in Delhomme Chapel of the Flowers for Horace Edward Pickett IV, 31, who passed away on June 23, 2020. Rev. Perry Hubbs, Pastor of First Baptist of Opelousas, will conduct the funeral services. Burial will take place in Calvary Cemetery. Horace, a resident of Opelousas, was the son of Horace E. Pickett III and the former Tammy Boudreaux Pickett. He was born in Lafayette but was raised in Houma and New Iberia. Horace graduated from NISH, class of 2007, where he played soccer for the love of the game. He loved hunting, fishing and golfing at any chance he could spare. Horace was always available to lend a helping hand to whomever may have been in need. Whether it be business or pleasure, he traveled as often as possible; places as far away as Russia and Equatorial New Guinea. Horace was a loving husband & father, who will be dearly missed by family and friends alike. He is survived by his wife, Chitra George Pickett; daughter, Sophia M. Pickett; father, Horace Edward Pickett III (Brenda); sisters, Crystal Pickett (David Blake), Sara Pickett Galbreath (Jason) and Ruth Pickett Sharp; nieces, Jordan and Jillian Galbreath; nephew, Jackson Galbreath; grandparents, Horace E. Pickett Jr and Jeanette Calais Pickett; grandmother, Dorothy Manning; step-sister, Daisy Fitch Thompson (Charles) and step-brother, Derek Fitch (Caroline). He was preceded in death by his mother, Tammy Boudreaux Pickett; and grandparents, Wilson and Bertha Boudreaux. The family requests that visiting hours be observed at Delhomme Funeral Home - Bertrand on Friday, June 26, 2020 from 8:00 AM until the time of service. Pallbearers will be named at a later date. Personal condolences may be sent to the Pickett family at www.delhommefuneralhome.com. Delhomme Funeral Home, 1011 Bertrand Drive, Lafayette, LA is in charge of funeral arrangements.

Funeral Services will be held at 1:00 PM on Friday, June 26, 2020 in Delhomme Chapel of the Flowers for Horace Edward Pickett IV, 31, who passed away on June 23, 2020. Rev. Perry Hubbs, Pastor of First Baptist of Opelousas, will conduct the... View Obituary & Service Information

The family of Horace Edward Pickett IV created this Life Tributes page to make it easy to share your memories.

Send flowers to the Pickett family.