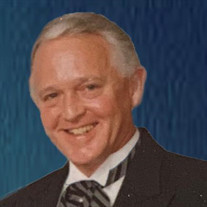 Funeral services will be held Saturday, December 11 at 3:00 PM at Episcopal Church of the Ascension in Lafayette for Howell (Howie) Arlistus Dennis Jr., 82, who died at his home on Tuesday, December 7, 2021. Father Joseph Daly will officiate the services. Visitation will be Saturday from noon until 2:00 PM at Delhomme Funeral Home in Lafayette. Serving as honorary pallbearers will be Robert Boone Outland III, Robert Boone Outland IV, Bernard Archie Watson Jr., Bernard Archie Watson III, Chris Verret and Jon Feerick. Howie is survived by a son, Howell A. Dennis III of Lafayette; a daughter, Barbara Dennis Outland (Robert) of Rich Square, North Carolina; two grandchildren, Robert Boone Outland IV and Mary Lois Outland, both of Rich Square; his nephew Bernard Archie Watson IV (Missy); three nieces, Anne Dennis Mouton (Stephan), Mary Dennis Miller and Kathryn Watson Thomas (Dave); and Maery Butler of Lafayette, who he described as his “second daughter.” He is preceded in death by his beloved wife of 44 years, Kathryn Stokes Dennis; his parents, Howell A. Dennis Sr., and Mary Stewart Dennis; his brother, Macy Stewart Dennis; and his nephew, David Stewart Lawrence Dennis. Howie was born December 17, 1938 in Lafayette, La. He was a 1956 graduate of Lafayette High School and a 1960 graduate of the University of Southwestern Louisiana, where he threw the javelin for the school’s track team and was a member of the Kappa Sigma fraternity. Howie served his county honorably in the U.S. Navy from 1960 to 1963. He worked for the Texaco Oil Company for three years following his military service. Eventually, he decided to attend LSU Law School and graduated in 1969. Specializing in oil and gas law, he practiced law in Lafayette for 46 years and retired as a partner with the law firm Dennis, Bates and Bullen. Howie enjoyed spending time with his family, especially his grandchildren; reading about World War II history; and being a devoted fan of the LSU Tigers and New Orleans Saints. Although nothing is official, it is believed he may have set the world record for the number of times an individual has seen the movie “Patton.” The family wishes to thank Amedysis Hospice Care, especially Stuart, Brittney, Sonya, and Whitney. In lieu of flowers, memorial gifts may be made to the American Diabetes Association or Ridgecroft School in Ahoskie, NC. Personal condolences may be sent to the Dennis family at www.delhommefuneralhome.com. Howell Arlistus Dennis, Jr. and his family were cared for and entrusted final arrangements to Delhomme Funeral Home, 1011 Bertrand Drive, Lafayette, LA.

Funeral services will be held Saturday, December 11 at 3:00 PM at Episcopal Church of the Ascension in Lafayette for Howell (Howie) Arlistus Dennis Jr., 82, who died at his home on Tuesday, December 7, 2021. Father Joseph Daly will officiate... View Obituary & Service Information

The family of Howell Arlistus Dennis Jr. created this Life Tributes page to make it easy to share your memories.

Send flowers to the Dennis family.