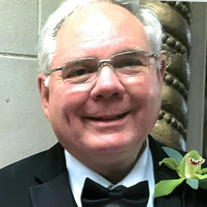 Funeral Services will be held at 1:00 PM Saturday, November 21, 2020, in the Delhomme Chapel of the Flowers for Hugh Francis Gremillion, Jr., 70, who peacefully passed away at home on November 18, 2020, surrounded by his loving family. Hugh was born on January 22, 1950 to Hugh Francis Gremillion, Sr. and the former Eloise Lemoine. A native of Cottonport, Hugh spent most of his life as a resident of Lafayette. He graduated high school from St. Paul's School in Covington in 1967 and earned his degree in Marketing from the University of Southwestern Louisiana. He was a 3rd degree member of the Knights of Columbus for over 40 years and his community service included the Lafayette Jaycees and the Sertoma Club of Lafayette. Hugh spent most of his career in sales, which afforded him the opportunity to do what he enjoyed best; meeting and sharing his sense of humor with people from all walks of life. He was generous and kind, taking pride in helping those in need. Hugh was happiest when cooking for family, friends and neighbors, and there was never an empty plate or glass. His joy was spending time with his wife, who he called "Red Bird," and sharing all of his 'Life's Pearls' with his children and grandchildren. Hugh was a natural on the piano and guitar; music always remained his passion. Hugh is survived by his wife of 50 years, Gerie Leclere Gremillion; his daughters, Natalie Gremillion Donnelly (Patrick), Gina Gremillion and Alison Gremillion Chambers (Chris); his four grandchildren, Avery Donnelly, Hayes Chambers, Connor Donnelly and Harrison Chambers and his siblings, Paula “Prunie” Gremillion, Donald Gremillion and Mary Doty. He was predeceased by his mother and father, Eloise Lemoine Gremillion and Hugh Francis Gremillion, Sr., and his brother, Lester Paul Gremillion. The family requests that visiting hours be observed in the Delhomme Funeral Home Chapel of the Flowers on Saturday, November 21, 2020, from 11:00 AM until time of service. The family would like to thank Hospice of Acadiana and the Oncology Department at Lourdes Hospital, namely Dr. Joseph Brierre, Eric Bueller, PA and the nurses, for their support and compassionate care. In lieu of flowers, the family requests that donations be made to the American Cancer Society, specializing in treatment of rare cancers, including urothelial carcinoma (transitional cell carcinoma). Personal condolences may be sent to the Gremillion Family at www.delhommefuneralhome.com. Delhomme Funeral Home, 1011 Bertrand Drive, Lafayette, LA, is in charge of arrangements.

Funeral Services will be held at 1:00 PM Saturday, November 21, 2020, in the Delhomme Chapel of the Flowers for Hugh Francis Gremillion, Jr., 70, who peacefully passed away at home on November 18, 2020, surrounded by his loving family. Hugh... View Obituary & Service Information

The family of Hugh Francis Gremillion Jr. created this Life Tributes page to make it easy to share your memories.

Send flowers to the Gremillion family.