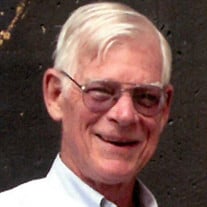 A private service with his immediate family will be held for Jack Godfrey on Tuesday, September 1st, 2020 at Sacred Heart Catholic Church Cemetery. Jack, 78 passed away at his home in Broussard, LA on Thursday, August 27th, 2020. Due to current world events, the burial service will be for immediate family only, with a Celebration of Life event to be scheduled at a later date. Caring, generous, and honest, with an insatiable thirst for knowledge is an understated description of Jack Godfrey, as anyone who knew him will attest. He was born John Joseph Godfrey in Queens, NY on December 19th, 1941. He attended Regis, a Jesuit High School in New York City, graduating in 1959. He spent the years immediately following in the Jesuit Seminary in upstate New York before finishing his collegiate education at Fordham University. He then attended Georgetown University where he earned his Ph.D. in Linguistics. He completed his post-doctorate work at Rite-Patterson Airforce Base in Dayton, OH where he met Nina, who would become his beloved wife of 44 years. Jack spent his entire career in research and development of Computer Voice Recognition and Speaker Recognition technology. He made significant contributions in the field, from TI’s “Speak and Spell” to his leadership of the US Department of Defense’s Human Language Technology Group at the National Security Agency. He was an accomplished linguist and was held in high regard. Jack was a loving and caring Husband, Father, Grandfather, Brother, and Uncle to his family. Jack was preceded in death by his parents, John Martin and Eleanor Margaret Godfrey, and his sister Patricia McDonough. He is survived by his wife, Nina Suru Godfrey of Broussard, LA; sisters Jean Beidl of Oakland, NJ, Anne Godfrey of Salinas, CA, and Mary Godfrey of Pacifica, CA; and his brother, Tom Godfrey of Woodloch Springs, PA; his sons, Brian Godfrey of Pottsboro, TX, Eliot Godfrey of Broussard, LA; and Paul Godfrey and his wife, Stephanie, with granddaughters Eliza, Suru, and June Godfrey of Charlotte, NC. Jack was a man filled with energy, drive, and commitment to accomplishment. His experience with the Jesuits made him a true “Man for Others.” He showed this every day of his life in how he raised his family, how he was involved in the community, and how he treated every person he met. Jack had many talents, when he wasn’t using his mind for cutting edge technology and the NYT crossword puzzle, he was using his hands to build/renovate/improve every home he lived in. He had a passion for travel, which brought him many memorable adventures with Nina around the world. He was a talented woodworker and many of his friends and family were the beneficiaries of his workshop creations at Christmas. He was an avid and accomplished fisherman who spent countless days on the water with his sons and closest friends, where he was truly happy. In lieu of flowers, the family requests that donations be made, in John’s name, to the charity of your choice. Personal condolences may be sent to the Godfrey family at www.delhommefuneralhome.com. Delhomme Funeral Home, 1011 Bertrand Drive, Lafayette, LA, is in charge of funeral arrangements.

A private service with his immediate family will be held for Jack Godfrey on Tuesday, September 1st, 2020 at Sacred Heart Catholic Church Cemetery. Jack, 78 passed away at his home in Broussard, LA on Thursday, August 27th, 2020. Due to current... View Obituary & Service Information

The family of Jack Godfrey created this Life Tributes page to make it easy to share your memories.

A private service with his immediate family will be held for...

Send flowers to the Godfrey family.