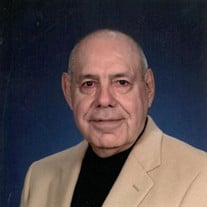 Memorial Services will be held at 1:00 PM on Wednesday, August 4, 2021 in Delhomme Chapel of the Flowers for James Joseph Bedore, Sr., 84, who passed away peacefully on August 1, 2021 surrounded by his family. Fr. Steve LeBlanc, Pastor of St. Basil Catholic Church - Judice, will conduct the funeral services. Mr. Bedore, a long time resident of Lafayette, was the son of the late Judson Bedore and the former Margaret Goff. Born and raised in Tupper Lake, NY, James left soon after graduating Tupper Lake High School to begin his military career. During his time in the Air Force, James met the love of his life on the beaches of Biloxi, MS. James proudly served in the United States Air Force for 20 years and retired in 1976. Upon retirement, he enrolled in USL and was the oldest freshman in his class; a fact he found quite humorous! In 1979, James graduated with B.S. in Business and entered the private sector as a Meteorologist, where he once again retired in 1999. This gave James time to fully pursue his passions: golf and spending time with his family. He is survived by his wife of 56 years, Marguerite Gail Primeaux Bedore; son, Timothy M. Bedore; grandchildren, Ethan P. Bedore and Madeline Claire Bedore; and canine companion, "Chewy" Bedore. He was preceded in death by his son, James J. "Jimmy" Bedore II; parents, Judson Bedore and Margaret Duffy; sister, Mary Bedore Bennett; brothers, Glen Bedore, Roger Bedore, and Jerry Bedore. The family requests that visiting hours be observed at Delhomme Chapel of the Flowers on Wednesday, August 4, 2021 from 10:00 AM until the time of service. The family would like to thank the nurses and staff of Amedisys Hospice. A special thanks, as well, to their long-time Family Physician, Dr. Kenneth Spiller, and his staff, Keisha and Jill, for their constant support. Personal condolences may be sent to the Bedore family at www.delhommefuneralhome.com. Delhomme Funeral Home, 1011 Bertrand Drive, Lafayette, LA is in charge of funeral arrangements.

Memorial Services will be held at 1:00 PM on Wednesday, August 4, 2021 in Delhomme Chapel of the Flowers for James Joseph Bedore, Sr., 84, who passed away peacefully on August 1, 2021 surrounded by his family. Fr. Steve LeBlanc, Pastor of St.... View Obituary & Service Information

The family of James Joseph Bedore Sr. created this Life Tributes page to make it easy to share your memories.

Memorial Services will be held at 1:00 PM on Wednesday, August...

Send flowers to the Bedore family.