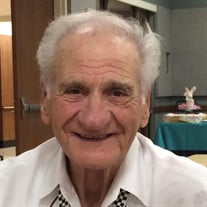 James Curtis Broussard passed away February 25, 2021 in Gulfport, MS surrounded by his family. An outdoor Visitation and Funeral Ceremony will be held at 10:00 AM on Monday March 1, 2021 at Sts. Peter and Paul Catholic Cemetery Mausoleum Canopy in Scott, LA. In the event of rain, visitation and ceremony will be inside the Delhomme Funeral Home in Scott, LA. Interment will be in Sts. Peter and Paul Catholic Cemetery Mausoleum in Scott. Jim was a native of Scott. He attended Scott Elementary and graduated from Scott High School in 1946. He was the youngest of eight children and after graduation he helped on his family farm while working at Wolfes Bakery in Lafayette. In 1950, he joined the US Air Force. He served 23 years, retiring in 1974. He was stationed in TX, Puerto Rico, FL, LA. and Alaska, then served his last four years at Andrews Air Force Base in Maryland as a member of the National Emergency Airborne Command Post. He served as a Command and Control Supervisor on the airborne command center, also known as the Doomsday Plane, which trails the president in case of an emergency. He traveled the world following Air Force One. He met Jenevieve Hebert at the Forest Club dancing in March 1953 and they married in August 1953. They had two daughters and moved base to base over the years following his military appointments. After retirement, they returned to Lafayette. He worked in the oil industry and for the US Post Office after his military service. Jim had a lifetime love of cars. Over the years he owned several collector cars with his 1959 Chevrolet Impala convertible and a 1950 Jeep Willys as his favorites. In his last years, Jim lived at the Armed Forces Retirement Home in Gulfport, MS near his daughter and son-in-law Nancy & Jim. He was active in organizing the dances there. A true southern gentleman, all who met him felt his kindness and genuine concern for them. He had many friends in Lafayette and Gulfport who will remember him for his laughter and love for dancing. He made a difference in many lives and the world is a better and much brighter place for it. He will be missed by many. Beloved father of Linda Broussard (David Vickers) and Nancy Fish (Jim). Grandfather to Jill Karolewski (Mike Dawson) and Steven Karolewski (Aimee Martin). Great Grandfather to Chase and Alex Karolewski. He was preceded in death by his parents Zepherin and Lucille Moreau Broussard. Siblings: Alvin, Elmo, Evelyn Mayers, Roy, Raymond, Lucille Picard Cox, and Maydel Hebert. He is survived by many nieces and nephews. Pallbearers will be David, Jim, Jill, Mike, Steven and Aimee. In lieu of flowers, the family requests a donation to your favorite charity. Personal condolences may be sent to the Broussard family at www.delhommefuneralhome.com. Delhomme Funeral Home, 705 Marie Street, Scott, LA, is in charge of funeral arrangements.

James Curtis Broussard passed away February 25, 2021 in Gulfport, MS surrounded by his family. An outdoor Visitation and Funeral Ceremony will be held at 10:00 AM on Monday March 1, 2021 at Sts. Peter and Paul Catholic Cemetery Mausoleum Canopy... View Obituary & Service Information

The family of James C. Broussard created this Life Tributes page to make it easy to share your memories.