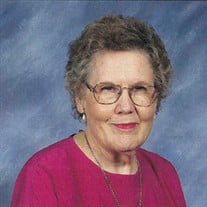 Funeral Services will be held at Asbury United Methodist Church at 2:30 PM on Friday, January 15, 2021, for Jimmie Nell “J’Nell” Walker Wright, 94, who passed away on Monday, January 11, 2021, at Cornerstone at the Ranch. Interment will be at Lafayette Memorial Park. “Ms. Jimmie,” as she was known to the nursing staff at Cornerstone, was the daughter of John J. and Ruth Walker. A resident of Lafayette, J’Nell graduated from University of Southern Mississippi as a major in piano and a minor in voice. She and her husband, Jesse, started a family and she was always there for the needs of her family. She spent many hours tending her very large vegetable garden. She taught private piano lessons for many years. She was a leader in Lafayette Toastmasters Club for many, many years. She and Jesse were founding members of Asbury United Methodist Church, where she sang in the adult choir and accompanied the children’s choirs for many years. After her parents passed away, J’Nell retired from teaching piano and after her husband passed away, she became a caretaker for homebound people. As her health declined, Jimmie received outstanding care at home, but eventually moved to Cornerstone at the Ranch where, even though she rarely spoke, the nurses enjoyed being with her. J’Nell is survived by her three children, Evan Harrison Wright, Ola Ruth Wright Ayers, and Holly Jean Wright Samson and husband Michael Robert Samson; her grandchildren, Daniel Gray and David Gray and wife, Ashley K. Gray and her adopted son, Matthew Gray. She was preceded in death by her husband, Jesse Franklin Wright; her parents, John J. and Ruth Jones Walker and her brother, Prentice Jones Walker. The family requests that visitation be observed at Asbury United Methodist Church on Friday, January 15, 2021, from 12:30 PM until the time of services. The family would like to extend their sincere appreciation to the staff at Cornerstone at the Ranch for the outstanding care given to their mother. Donations may be made, in J’Nell’s memory, to Traditions Health (formerly Grace Hospice) at 217 Rue Louis XIV, Suite 100, Lafayette, LA 70508. Personal condolences may be sent to the Wright Family at www.delhommefuneralhome.com. Delhomme Funeral Home, 1011 Bertrand Drive, Lafayette, LA, is in charge of funeral arrangements.

The family of Jimmie Nell "J'Nell" Walker Wright created this Life Tributes page to make it easy to share your memories.

Funeral Services will be held at Asbury United Methodist Church...