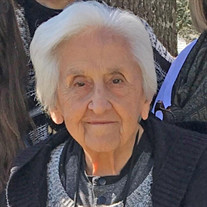 A Mass of Christian Burial will be held at 10:00 AM on Monday, February 8, 2021 in Sts. Peter & Paul Catholic Church for Joan Claire Sonnier, 90, who passed away on February 4, 2021 at her home surrounded by family. Fr. Cedric Sonnier, Pastor of St. Mary Mother of the Church, will be the Celebrant of the Mass and will conduct the funeral services. Fr. Mark Derise and Fr. Tom Voorhies will serve as Co-Celebrants of the Mass and assist in conducting the funeral services. Burial will take place in Sts. Peter and Paul Cemetery. Jo Jo was born on July 22, 1930 in Kaplan, Louisiana to Gabriel and May Mariast. Jo Jo was educated at the Sacred Heart Academy at Grand Coteau where her faith was nurtured and a piece of her heart remained for her entire life. She attended Dominican College in New Orleans and graduated in Education. Her love of life and adventure was curtailed by a handsome man by the name of Hue Sonnier and they soon married. The happy couple settled in Scott, Louisiana where they had seven beautiful children that soon became the joy of her life. As time passed her 9 grandchildren experienced the same uncompromising devotion and love from their Maw Maw Jo. Jo Jo never lost her love of life and adventure focusing it on raising a devout Catholic family and sharing her faith with her Scott community. Like her father she totally enjoyed a rousing political debate as well as digging deep into the tough questions of life. Her delight in getting to know people was contagious and made everyone feel like they were part of her family. Her legacy will live on in the hearts of every person who got to know Jo Jo and the world is definitely better because of it. Jo Jo is survived by her children, Louise Sonnier, Joan Sonnier, Mary Sonnier, Bert Sonnier and his wife Sue Sonnier, Alida Bertholf and her husband Dutch Bertholf, Freddie Sonnier and his wife Chris Sonnier, and Annie Sonnier. In addition, she leaves behind 9 grandchildren and 9 great grandchildren to whom she was lovingly known as Maw Maw Jo. The family would like to extend their gratitude to Jojo’s lifelong caretaker and friend Mary Landry. In addition, they would like to thank Bridgeway Hospice for the extraordinary care of their mother in her final days. She is survived by her children, Louise S. Credeur, Joan M. Sonnier, Mary E. Sonnier, H. "Bert" Sonnier, Jr. (Susan R.), Freddie P. Sonnier (Christine A.), Alida L. Bertholf (Dutch) and Ann M. Sonnier; grandchildren, Laura C. Feliciano (Dan), Karen Credeur, Cindy S. Orlando (Matt), Colby Sonnier (Ashley), Casey Sonnier (Stacey), Blake Sonnier, Kate Sonnier, Claire S. Bertholf and Catherine Bertholf; great-grandchildren, Tosca Feliciano, Manny Feliciano, Luke Palombo, Liam Schwing, Jett Schwing, Olivia Sonnier, Camille Sonnier, Andrew Orlando and Jack Orlando. She was preceded in death by her husband of 56 years, Hubert Sonnier, Sr; parents, Gabriel and May Maraist; sisters, Marguerite M. Herpin and Gay M. Hanks. The family requests that visiting hours be observed at Delhomme Funeral Home - Scott on Sunday, February 7, 2021 from 4:00 PM to 8:00 PM. A Rosary will be prayed at 7:00 PM on Sunday evening in the funeral home. Visiting hours will continue Monday, February 8, 2021 at Sts. Peter & Paul Catholic Church from 9:00 AM until the time of service. Pallbearers will be Casey Sonnier, Colby Sonnier, Dutch Bertholf, Chris Sonnier, Sammy Herpin and Stevie Hanks, with Johnny Herpin serving as an Honorary Pallbearer. For those unable to attend, the Mass will be live-streamed via the website for Sts. Peter & Paul. See hyperlink below: http://www.stspeterandpaulscott.org/watch-live/. In lieu of flowers the family asks for donations to be made in Jo Jo’s honor to Bridgeway Hospice. Personal condolences may be sent to the Sonnier family at www.delhommefuneralhome.com. Delhomme Funeral Home, 705 Marie Street, Scott, LA is in charge of funeral arrangements.

A Mass of Christian Burial will be held at 10:00 AM on Monday, February 8, 2021 in Sts. Peter & Paul Catholic Church for Joan Claire Sonnier, 90, who passed away on February 4, 2021 at her home surrounded by family. Fr. Cedric Sonnier, Pastor... View Obituary & Service Information

The family of Joan "Jo Jo" Sonnier created this Life Tributes page to make it easy to share your memories.

Send flowers to the Sonnier family.