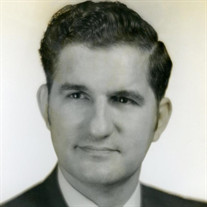 A Mass of Christian Burial will be held at 11:00 AM on September 14, 2020 at Our Lady of Fatima Catholic Church for John Elden Butcher, 90, who passed away on September 10, 2020. The family requests that visiting hours be observed on Sunday, September 13, 2020, from 4:00-7:00 PM at Delhomme Funeral Home on Bertrand. A Rosary will be recited at 5:30 PM on Sunday. Visiting hours will continue at Our Lady of Fatima Catholic Church on Monday, September 14, 2020, from 10:00 AM until the time of service. For friends and family members planning on attending the visitations or service of John Elden Butcher, please wear a mask out of courtesy to others in attendance. The family thanks you kindly in advance. Burial will take place in Calvary Cemetery. Elden passed peacefully in his home surrounded by loved ones. Left to cherish his memory is his wife of 70 years, Dorothy “Dotsie” Elaine Smith Butcher; his sister, Rose Mary Butcher Queen; his children, Steven Butcher and wife, Tami, and Brian Butcher; his grandchildren, Ryan Butcher, Benjamin Rodrigue, Melissa Rodrigue Speyrer and husband, Joey, Rachel Rodrigue, Callie Butcher and fiance, Cole Billeaud, Brennan Butcher, Jamie Butcher, Spencer Butcher, and Molly Butcher; and his great grandchildren, Nora Meche, Vivian Speyrer, Scarlett Speyrer, and Elden Speyrer. He is preceded in death by his parents, Joseph Edwin Butcher and Rose LeBlanc Butcher; his brother, Donny Butcher; and his daughter, Pamela Ann Butcher Rodrigue. Elden was born and raised in Lafayette, graduating from Cathedral High School, an all-boys school, in 1947 processing alongside Dotsie who was graduating simultaneously from Mount Carmel High School, an all-girls school. He attended SLI (now UL) and began crafting his future in entrepreneurial endeavors going on to own many businesses in the Lafayette area. During his 20s, he served in the National Guard stationed at Fort Polk. Elden had a passion for working on Lafayette’s Mardi Gras and was a board member of the Southwest Louisiana Mardi Gras Association serving as President in 1974. He participated in the Krewe of Gabriel from the 1960's to early 2000’s. In 1983, he was honored to be the 15th King of the Krewe of Attakapas. For nearly a decade, he devoted much of his time to the Bishop’s Charity Ball and was honored by the board for his services in 2002. Aside from his personal interests, he and Dotsie never shied away from business ventures, owning Butcher Distributing, The Lodge, The Plaster Gallery, and Accent Studios to name a few, all while raising their family. Elden was an early adopter of computers and was self-taught to write his own programs. To this day, his grandchildren are trained to use them for the bookkeeping of his various businesses. Even at the age of 90, he had an iPhone and would talk to Siri on a daily basis, often being upset with her for not understanding exactly what he wanted. To know him was to know his elaborate zest for rhyming words and alliteration recited to keep his mind sharp -- just ask anyone in the family about the Acme School Bell Company. Pallbearers will be Ryan Butcher, Benjamin Rodrigue, Cole Billeaud, Joey Speyrer, Brennan Butcher, and Spencer Butcher. The family of Elden Butcher wishes to extend their most sincere gratitude to Hospice of Acadiana and all those that contributed to his care. Personal condolences may be sent to the Butcher Family at www.delhommefuneralhome.com. Delhomme Funeral Home, 1011 Bertrand Drive, Lafayette, LA, is in charge of funeral arrangements.

A Mass of Christian Burial will be held at 11:00 AM on September 14, 2020 at Our Lady of Fatima Catholic Church for John Elden Butcher, 90, who passed away on September 10, 2020. The family requests that visiting hours be observed on Sunday,... View Obituary & Service Information

The family of John Elden Butcher created this Life Tributes page to make it easy to share your memories.

A Mass of Christian Burial will be held at 11:00 AM on September...

Send flowers to the Butcher family.