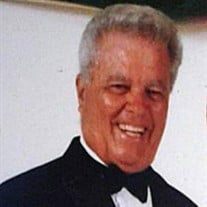 Funeral Services will be held at 10:00 AM on Saturday, July 25, 2020, in the Delhomme Chapel of the Flowers for John William Fetzer, 94, who passed away at 10:30 PM on July 2, 2020. Reverend Luther Burney of First Baptist Church in Lafayette, will conduct the funeral services. John will be laid to rest at Lafayette Memorial Park Cemetery, 2110 West Pinhook Road, in Lafayette, LA. Military honors will be conducted at the gravesite by US Army personnel and the Acadiana Honor Guard. John’s parents, John Henry Fetzer, Sr. and Marguerete Boucher Fetzer, brought John into the world on February 7, 1926. John graduated from Byrd High School in Shreveport in 1943. In August of 1943, he enrolled at LSU with a baseball/football scholarship. In 1944, he enlisted into the US Army, where he attained the rank of Sergeant. In 1946, after receiving an honorable discharge from the Army, he signed a professional baseball contract with the 1946 Boston Braves. He was one of the original “Bonus Babies”. After an injury cut short his baseball career, he went on to work for a cotton buyer in Texas. It was there that he made the best decision of his life, marrying Pauline “Bea” Davis in 1953. John and Bea were the proud parents of three children. He went to work for the Ohio Oil Company, now Marathon Oil, and retired from there in 1991. For a period of twenty years, John also scouted for the Los Angeles Dodgers, primarily in the State of Louisiana. John was also a founder of The Baton Rouge Kid's Baseball Clinic, which taught baseball to the youth of Baton Rouge and surrounding areas for 63 years. John is survived by his sons John Milton Fetzer of Texas and James Edwin Fetzer of Texas and his daughter Jeri Reneé Morgan of Lafayette, LA; and his brothers, Robert M. Fetzer of Georgia, and Donald E. Fetzer of Texas. John was the proud grandfather of nine grandchildren and fourteen great-grandchildren. He was preceded in death by his wife, Pauline B. “Bea” Fetzer; his parents; and his brothers, Edward V. Fetzer of Baton Rouge and John H. Fetzer, Jr. of Shreveport. The family requests that visiting hours be observed at Delhomme Funeral Home – Bertrand, on Saturday, July 25, 2020, from 8:00 AM until the time of service. Pallbearers will be John’s grandsons, Andrew Brewer of Texas, John Fetzer, Jr. of Texas, Jeffrey Fetzer of Texas, James Fetzer of Texas, Cody Fetzer of Texas, Steve Jones of Florida, Henry Broussard of Lafayette, LA and Bill Parrott of Lafayette, LA. Honorary pallbearers are former LSU Athletic Director and Head Baseball Coach, Skip Bertman; current LSU Head Baseball Coach, Paul Mainieri; Charlie Dugas, The Baton Rouge Breakfast Bunch, including V.J. Bella, Bob Bowman, William Daniels, George Guidry, Chris Guillot, Mike Lyons, Bill Parrott, Sam Poole, Jim Porter, Randy Roach and John Siracusa; Eric Fontenot, M.D., Patrick Welch, M.D. and Joseph Kowalski, M.D. The family would like to extend sincere thanks to Grace Home Health and nurses, Mary, Gabby, Kelly, Allison and Whitney. A kind expression of sincere gratitude is also extended to Ms. Judy Credeur, a dear friend and honorary family member to John and the entire Fetzer Family for over forty-five years. Personal condolences may be sent to the Fetzer family at www.delhommefuneralhome.com. Delhomme Funeral Home, 1011 Bertrand Drive, Lafayette, LA is in charge of funeral arrangements.

Funeral Services will be held at 10:00 AM on Saturday, July 25, 2020, in the Delhomme Chapel of the Flowers for John William Fetzer, 94, who passed away at 10:30 PM on July 2, 2020. Reverend Luther Burney of First Baptist Church in Lafayette,... View Obituary & Service Information

The family of John William Fetzer created this Life Tributes page to make it easy to share your memories.

Send flowers to the Fetzer family.