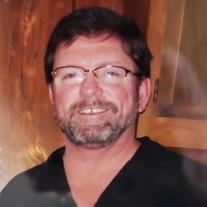 A Mass of Christian Burial will be held at 1:00 PM on Wednesday, November 18, 2020 in St. Jules Catholic Church for John Perry Gumpert, 58, who passed away on Sunday, November 15, 2020 at his residence. Father Dan Edwards, Pastor of St. Jules Catholic Church, will be the Celebrant of the Mass and conduct the funeral service. Inurnment will take place on Friday, November 20, 2020, at 10:30 AM in Calvary Cemetery in Jennings, Louisiana. Reverend Sam A. "Trey" Ange will officiate. John, a resident of Youngsville, was the son of the late Dr. Carl A Gumpert Sr. and the former, Louella Perry. You can tell a lot about a person by who and what they love most; for John Perry Gumpert that would be family, dancing, hunting and LSU football. First and foremost was John’s family. He married the love of his life, Laury Courrege, four years ago after they first met in 2008 (on the dance floor, naturally). John couldn’t waltz or two-step, but he was the most handsome man in the room and he could hold his own doing the jitterbug. Laury still is smitten, and it’s more than his moves or his looks; it was the way he treated her and her family. When he proposed, John asked each of her five siblings for permission at a crawfish boil. He never had children, but he claimed Laury’s daughter, Lauren Fontenot, and Laury’s granddaughter, Kamryn Fontenot, as his own. John was the middle child of five siblings. He was raised in a good Catholic family, but that didn’t stop him from finding mischief. His mom even occasionally got in on the fun and made him hard pillows to take to Boy Scout camp so he would dominate pillow fights. John’s high school nickname was “Dr. Cheeks” after a prank that had nothing to do with his face and everything to do with a full moon. Finally, God bless all of his sister’s dates, who were brave enough to face him and his jokes. A perfect weekend for John might’ve started with a Friday night on the dance floor, followed by a Saturday morning in the marsh. Some years, he made it to a duck blind for nearly half of the season’s 60 days. John marveled at the sunrise and the beauty of the Louisiana bayou. He relished trading stories while casting a line. John loved hunting and fishing so much that he didn’t mind when things didn’t go his way, like when he and his brother-in-law were thrown from their boat that didn’t have a kill switch. His groom’s cake pictured a boat and water, complete with two men thrown overboard. Last, but not least, was John’s love of LSU football. He endured the team’s losses and reveled in its wins. The day the top-seeded Tigers trounced Clemson in the National Championship was the same day John found out he had cancer. He fought ferociously to live. In his final months, John prayed a rosary every night with Laury and strengthened his relationship with God. Before he died, John bought two trees and asked Laury to plant them at the house they planned to build next door to Lauren and Kamryn. Those trees will be a constant reminder of John’s loving and giving nature. Everyone else who loved John carries their own special memories and it would not be surprising if many of those include a dance floor, a duck blind or the Tigers. He is survived by his wife, Laury Courrege Gumpert; daughter, Lauren S. Fontenot (Jeremy); granddaughter, Kamryn Fontenot; siblings, Carl Gumpert Jr (Tammy), Paul Gumpert (Felicia); Kris Gumpert and Elizabeth “Buffy” G. Mitchell (Joe). He was preceded in death by his parents, Carl and Louella Gumpert. The family requests that visiting hours be observed at Delhomme Funeral Home - Bertrand on Wednesday, November 18, 2020 from 10:00 AM to 12:45 PM. A Rosary will be recited at 11:00 AM on Wednesday morning in the funeral home. Pallbearers will be Kristopher Gumpert, Joe Mitchell, Mark Courrege, Brent Courrege, Philip Trepagnier, Brent Stokes, Brett Stokes and Kirk Piccione. The family would like to thank the nurses of LGMC – Interventional Radiology, especially Delanie, Marina and Courtni, for the compassionate care they gave John. The family would also like to thank Heart of Hospice, Dr. Sacarro and Dr Salopek. Lastly, a special thank you to “our angels”, Angela Levene and Tana Levene. In lieu of flowers, the family requests donations be made to St. Jules Catholic Church. Personal condolences may be sent to the Gumpert family at www.delhommefuneralhome.com. Delhomme Funeral Home, 1011 Bertrand Drive, Lafayette, LA is in charge of funeral arrangements.

A Mass of Christian Burial will be held at 1:00 PM on Wednesday, November 18, 2020 in St. Jules Catholic Church for John Perry Gumpert, 58, who passed away on Sunday, November 15, 2020 at his residence. Father Dan Edwards, Pastor of St. Jules... View Obituary & Service Information

The family of John Perry Gumpert created this Life Tributes page to make it easy to share your memories.

A Mass of Christian Burial will be held at 1:00 PM on Wednesday,...

Send flowers to the Gumpert family.