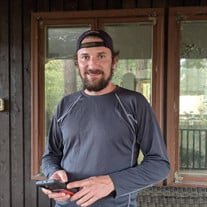 Family and friends are invited to attend visitation and a memorial service in honor of John Grayling LeMaire, Jr. on Friday, December 18, 2020, from 10:00 AM until 8:00 PM. The Memorial Service will begin at 5:30 PM in the Delhomme Funeral Home Azalea Parlor, 1011 Bertrand Drive, Lafayette, LA. John is survived by his mother, Danette Pierce LeMaire; father, John Grayling LeMaire, Sr. and stepmother Karen LeMaire; son, Brayden Taylor; grandmother, Elma Bardeleben Pierce; stepbrothers, Jason and Joey Airhart; aunts, Dawn Pierce Townsend and s/o Christopher Todd Hendricks, Belinda LeMaire, and Johnette Boudreaux and husband Carl Boudreaux; uncle, Keith LeMaire and cousins, Chasity Herndon, Joseph Gurry and wife Bobbi Jo Gurry, Keith James Vining, Crystal Smith, Heather Calvert, Allison Bergeron and Mellisa Benton. He was preceded in death by his grandparents, John Wilfred (Billy) LeMaire, Mazel Simon LeMaire and Howard Daniel Pierce. John was very devoted to his family and friends. He never met a stranger and was always the life of the party! You couldn't tell if he had just met that person or had been friends with them for years. He was a Champion to his friends and they always knew he would be there to listen and he always found a way to make them laugh. One thing is for sure, he touched so many hearts during his short time on Earth. It's been a blessing having "Lucky Charms" in our lives! We love you! More than you knew!! A longtime resident of Lafayette, Louisiana, John was an extreme sports enthusiast who started skateboarding at the age of three and took up surfing and kayaking in his later years. He preferred to be outside and active. Although a truck driver by trade, his passion was being a light designer. Building, designing, programing and presenting laser light shows brought him happiness. In lieu of flowers, please make a donation to American Foundation for Suicide Prevention at AFSP.donordrive.com. Personal condolences may be sent to the LeMaire Family at www.delhommefuneralhome.com. Delhomme Funeral Home, 1011 Bertrand Drive, Lafayette, LA, is in charge of funeral arrangements.

Family and friends are invited to attend visitation and a memorial service in honor of John Grayling LeMaire, Jr. on Friday, December 18, 2020, from 10:00 AM until 8:00 PM. The Memorial Service will begin at 5:30 PM in the Delhomme Funeral Home... View Obituary & Service Information

The family of John Grayling LeMaire Jr. created this Life Tributes page to make it easy to share your memories.

Family and friends are invited to attend visitation and a memorial...

Send flowers to the LeMaire family.