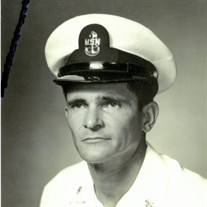 Funeral Services will be held at 2:00 PM on January 3, 2022 in Delhomme Chapel of the Flowers - Bertrand for Joseph Wilton Laverne , 91, who passed away on December 27, 2021 at his home. Deacon Frank Cormier will conduct the funeral services and Robert Laverne will give the eulogy. Burial will take place in St. John Berchmans Cemetery in Cankton. Joseph was a retired Navy Veteran with 20 years of service. After retirement, he and his wife traveled to, and lived, in her home country of Puerto Rico for a few years before coming home to Louisiana to enjoy their grandkids. Affectionately known by everyone as “Paw-Paw”, he and his wife Maria, enjoyed opening their home to family and friends for birthdays, holidays, and everyday gatherings. His grandkids were his greatest delight next to his beautiful wife. His home encompassed every toy and “treat” a child could want. When he wasn’t spoiling grandkids, you could find him in the yard working in his flower beds or building something. Joseph was a friend to many as he never met a stranger, he was a kind and giving man. Mr. Laverne, a resident of Lafayette, is preceded in death by his parents, John Laverne and the former Louise Venable. He is survived by his beloved wife of 64 years, Maria Laverne; three sons, Robert Laverne, wife Sheri; Louis Laverne, wife Joyce; and Freddy Laverne, wife Michelle. His grandchildren, Kory Laverne, Chassidy Gremillion, Corbin Laverne, and Caden Laverne; and great-grandchildren, Karl Lawrence III, Bailey Lawrence, Cole Laverne, Zaden Laverne and Jonah Laverne. The family requests that visiting hours be observed at Delhomme Funeral Home - Bertrand on Monday, January 3, 2022 from 10:00 AM until time of service. Pallbearers will be Kory Laverne, Corbin Laverne, Caden Laverne, Karl Lawrence III, Chuck Guidry, and Kenneth Thibodeaux. Personal condolences may be sent to the Laverne family at www.delhommefuneralhome.com. Joseph Wilton Laverne and his family were cared for and entrusted final arrangements to Delhomme Funeral Home, 1011 Bertrand Drive, Lafayette, LA.

Funeral Services will be held at 2:00 PM on January 3, 2022 in Delhomme Chapel of the Flowers - Bertrand for Joseph Wilton Laverne , 91, who passed away on December 27, 2021 at his home. Deacon Frank Cormier will conduct the funeral services... View Obituary & Service Information

The family of Joseph "Paw-Paw" Wilton Laverne created this Life Tributes page to make it easy to share your memories.

Send flowers to the Laverne family.