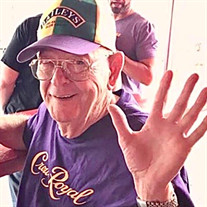 Joseph Michael Whittenberg, Sr. passed away peacefully at Lafayette General Medical Center on Friday, May 29, 2020, at the age of 80. Joe was born in Opelousas, Louisiana and graduated from Menard Memorial High School in 1957. He attended Southwestern Louisiana Institute (now ULL) where he pledged Kappa Sigma Fraternity. He eventually left college and entered the Army, where he served as an MP (Military Police) while stationed in the Philippines. After leaving the military, Joe settled down in Lafayette, working for the Breaux Bridge Post Office as a rural carrier for more than 20 years before retiring. He continued to work beyond retirement at various Lafayette night clubs, such as The Keg, Nite Caps, Nitetown & Grant Street Dance Hall. Mr. Joe remembered by patrons as always holding his hand up indicating “5,” for the entrance fee. He enjoyed seeing the crowds a couple of days a week and considered his time there as less of a job and more of his “entertainment.” He is affectionately remembered by those he worked with as more than just staff, but as a member of the family. According to the club owner, Mr. Joe was always dependable and loyal, and never missed a day of work in the 24 years he worked there. More than anything, Joe loved his family. He visited his grandchildren every Sunday, unless, of course, the Saints were playing that night, of whom he was an avid fan. Joe is survived by two sons, Joseph Michael Whittenberg, Jr, and his wife, Suzanne (Abshire), John Rayburn Whittenberg, and his wife, Joanna (Eues); three grandchildren, Amanda Whittenberg Pillette, and her husband, Trey, Joseph Michael Whittenberg, III (Jay), and Charles Rayburn Whittenberg. He also is survived by three great grandchildren, Adeline, Carter, Cayden Pillette. He was preceded in death by his parents, Joseph Lafayette Whittenberg and Mary Alice Whittenberg, and one sister, Kelly Whittenberg Peterson. Services for Joseph Whittenberg, Sr. will be held on Tuesday, June 2, 2020 at 10:00 AM at St. Edmonds Catholic Church, with Reverend Gil Dutel officiating. Burial will follow at Fountain Memorial Gardens. Visitation celebrating the life of Joseph Whittenberg, Sr. will be at Delhomme Funeral Home in Lafayette, Louisiana, on Monday, June 1, 2020 between the hours of 4:00 PM and 9:00 PM. Visiting hours will continue Tuesday from 8:00 AM until time of the service. Honored pallbearers serving will be Charles Whittenberg, Jay Whittenberg, Trey Pillette, George Favaloro, Shane Bodin and Marek Kopieczek. Memorials may be made in Joe’s honor to American Neuromuscular Foundation or the charity of donor’s choice. Personal condolences may be sent to the Whittenberg family at www.delhommefuneralhome.com. Delhomme Funeral Home, 1011 Bertrand Drive, Lafayette, LA is in charge of arrangements.

Joseph Michael Whittenberg, Sr. passed away peacefully at Lafayette General Medical Center on Friday, May 29, 2020, at the age of 80. Joe was born in Opelousas, Louisiana and graduated from Menard Memorial High School in 1957. He attended... View Obituary & Service Information

The family of Joseph M. Whittenberg, Sr. created this Life Tributes page to make it easy to share your memories.

Send flowers to the Whittenberg, family.