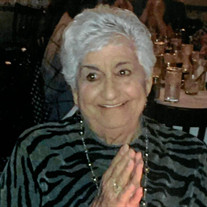 Funeral Services will be held at 11:00 AM on Monday, January 3, 2022 in Delhomme Chapel of the Flowers - Bertrand for Juliette Anne Colvin, 93, who passed away on December 29, 2021 at her home. Deacon Cody Miller will conduct the funeral services. Burial will take place in Calvary Cemetery. Mrs. Colvin, a resident of Lafayette, was the daughter of the late Richard J. Ashy, Sr. and the former Cocab Mahfouz. Born in Brinkley, Arkansas, Juliette and her family moved to Lafayette where she met the love of her life, Hershel Colvin while attending SLI. They raised four beautiful children and were married for over 50 years. She was an excellent cook, loved a good party, and playing cards. We know she is bringing in the New Year with all of her loved ones in Heaven and is likely putting a game of Rummie/Bouree together. She is survived by her children, Michael Colvin, Deborah Nails and partner, Mike Allen, Patrick Colvin and wife, Lark, and Bekki Boudreau and husband, Mike; grandchildren, Jon, Christopher, and Ben Colvin, Taylor Marks, Erika Littell, Michele Foreman, Kristen Domingue, and Ezra LeBourgeios, brother, Charles Ashy and his wife, Mimi, and brother-in-law, John Lauer. She was preceded in death by her parents; husband, Herschel Colvin, Jr., grandson, Isaac LeBourgeois; son-in-law, Mike Nails; siblings, Richard (Betty) Ashy, Jr., Helen (George) Ashy, William (Margaret) Ashy, Rose (Charles) Broussard, and Barbara Lauer. The family requests that visiting hours be observed at Delhomme Chapel of the Flowers on Monday, January 3, 2022 from 9:00 AM until the time of service. The family would like to thank the staff of Hospice of Acadiana and her devoted sitters, Ferdie, Sparkle, Joanne, Sherrell, Sharice, Gemma, Nicole, and Lataisha for their compassionate care, and special thanks to the best neighbor and dear friend, Marlene. Personal condolences may be sent to the Colvin family at www.delhommefuneralhome.com. Juliette Anne Colvin and her family were cared for and entrusted final arrangements to Delhomme Funeral Home, 1011 Bertrand Drive, Lafayette, LA.

Funeral Services will be held at 11:00 AM on Monday, January 3, 2022 in Delhomme Chapel of the Flowers - Bertrand for Juliette Anne Colvin, 93, who passed away on December 29, 2021 at her home. Deacon Cody Miller will conduct the funeral services. Burial... View Obituary & Service Information

The family of Juliette Anne Colvin created this Life Tributes page to make it easy to share your memories.

Send flowers to the Colvin family.