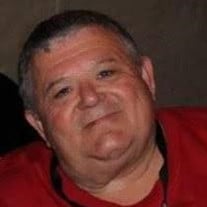 Funeral Services will be held at 1:00 PM on Saturday, December 28, 2019 at Delhomme Funeral Home-Scott for Keith Ray Rouly, 65, who passed away on December 24, 2019. Burial will take place in Holy Mary Mother of God Cemetery. Mr. Rouly, a resident of Lafayette, was the son of the late Lovelace Rouly and the former Una Broussard. A graduate of Acadiana High School, Class of 1972, Keith then attended USL and graduated in 1976 with a BS of General Business. He worked 45+ years in the Oil & Gas Industry, serving as a general manager and also in sales. Keith worked with many reputable companies throughout the years, including but not limited to; DOW Chemical, Forest Oil, Patterson, ICO/Tuboscope, Knight Oil Tools and Sea Shore Energy Services. His hobbies included bass fishing and riding his Honda Goldwing motorcycle. Keith was a member of many clubs & organizations, including LOBFC, Rig Riders MC and Acadiana Riders MC. He will be dearly missed by all those whose lives he has touched. He is survived by his wife of 38 years, Vivian Lucille Rouly; numerous nieces & nephews; and 12 feline children & 7 canine children. He was preceded in death by his parents, Lovelace and Una Rouly; brother Terry Rouly; and nephew, Barrett Rouly. The family requests that visiting hours be observed at Delhomme Funeral Home-Scott on Saturday, December 28, 2019 from 9:00 AM to 12:45 PM. Pallbearers will be Michael Barrett, Gerald Grand, Steve Langwell, Lawson Rouly, Rand Rouly and Michael Sheffield. Honorary Pallbearers will be Ken Allemand, Thomas Barrett, Cody Barrett, Chuck Briley, Robby Briley, Jerry Crews, Joey Daigle, Steve Daniel, Ronnie Gilbert, Clint Prentiss, Kirk Guilbeau and Mark Pye. The family would like to thank the nurses and staff at The Carpenter House for their compassionate care. Special thanks to his doctors, Zeik, Garo & Appley, and the staff at Lafayette General Medical Center, 9th floor, for all of their help during his time of need. Personal condolences may be sent to the Rouly family at www.delhommefuneralhome.com. Delhomme Funeral Home, 705 Marie Street, Scott, LA is in charge of funeral arrangements.

Funeral Services will be held at 1:00 PM on Saturday, December 28, 2019 at Delhomme Funeral Home-Scott for Keith Ray Rouly, 65, who passed away on December 24, 2019. Burial will take place in Holy Mary Mother of God Cemetery. Mr. Rouly, a... View Obituary & Service Information

The family of Keith Ray Rouly created this Life Tributes page to make it easy to share your memories.

Funeral Services will be held at 1:00 PM on Saturday, December...

Send flowers to the Rouly family.