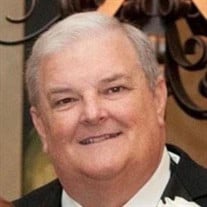 A Mass of Christian Burial will be held at 2:00 PM on Thursday, October 15, 2020, in Sts. Peter and Paul Catholic Church for Kenneth Douglas Beaugh, 68, who passed away on October 11, 2020 at Our Lady of Lourdes Regional Medical Center. Reverend Mark Derise, Pastor, will serve as Celebrant of the Mass and will conduct the funeral services. Burial will take place in Sts. Peter and Paul Mausoleum. Kenny was an avid sports fan with a love for LSU and especially the Acadiana High Wrecking Rams. He never missed a Rams sporting event and attended countless practices. He developed personal relationships with numerous players and coaches throughout the past 25+ years. He loved his family more than anything, especially his two grandchildren. He will be remembered for his loving smile, gentle spirit, and tender heart. He will be missed dearly. Kenny, a native of Eunice and a resident of Scott for the past 40 years, was the son of the late Leon Beaugh and the former Annabelle Sibille. He is survived by his wife, Mary (Mae) Beaugh; children, Stacy Beaugh Briggs and her husband, Brian, and Holly Beaugh Doucet and her husband, Jared; grandchildren, Owen and Ava Doucet; siblings, Becky Beaugh Lege and her husband, Calvin, Terry Beaugh and his wife, Connie, Tony Beaugh and his wife, Theresa, and Gina Beaugh Coscarart, as well as numerous nieces and nephews. He was preceded in death by his parents and his dear friend, Alfred Lopez. The family requests that visiting hours be observed at Delhomme Funeral Home in Scott on Wednesday, October 14, 2020 from 3:00 PM until 9:00 PM. A Rosary will be recited at 6:30 PM on Wednesday evening in the funeral home. Visiting hours will continue on Thursday from 9:00 AM until the time of service. Pallbearers will be Terry Beaugh, Tony Beaugh, Jared Doucet, Brian Briggs, Mick Stein, Jonathan Coscarart, Brannon Bourque, and Mike Conrad. Honorary Pallbearers will be Dale Soileau, Russell Pavich, Robby Chachere, Don Darbonne, and the Acadiana Rams Athletic Department. We would like to extend our sincere thanks to the ICU team and doctors who cared for him so lovingly at Our Lady of Lourdes Regional Medical Center. Personal condolences may be sent to the Beaugh family at www.delhommefuneralhome.com. Delhomme Funeral Home, 705 Marie Street, Scott, LA, is in charge of funeral arrangements.

A Mass of Christian Burial will be held at 2:00 PM on Thursday, October 15, 2020, in Sts. Peter and Paul Catholic Church for Kenneth Douglas Beaugh, 68, who passed away on October 11, 2020 at Our Lady of Lourdes Regional Medical Center. Reverend... View Obituary & Service Information

The family of Kenneth D. Beaugh created this Life Tributes page to make it easy to share your memories.

Send flowers to the Beaugh family.