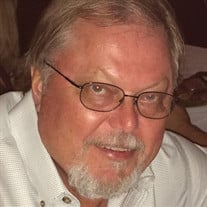 Memorial Services will be held at a later date for Kenneth Eugene Begley, Jr., 68, who passed away on April 21st, 2020. Kenny, a resident of Lafayette, was the son of the late Kenneth Begley, Sr., and the former (Ethel) Estelle Lockwood. Ken was a kind soul. An employee of Infinity Valve and Supply in Youngsville, La., and mentor to André. He loved his people there and loved to feed them. Ken loved people, and was well known for his briskets, white beans and fried catfish. He had a lot of help cooking and eating his specialties over the years from good friends. Ken kept detailed files for his work and his life, but none of the files were as thick as his recipe files. Ken started working in the oilfield at Franklin Supply in the early 70’s and had a long career with Wilson Supply, before finally landing at Infinity Valve and working his way into their hearts. Ken fell in love with fishing with his friends and eventually got bitten by the bass bug and went “all in”. He became a fixture at the oilfield charity bass tournaments and actually picked up a check or two along the way. Ken was active in the Lafayette Oilman’s Bass Fishing Club (LOMBFC) for 30 years. He held every club office as President, Vice President, Secretary and has been club Treasurer for the last 20 years. Ken finished in the top 6 of the club and represented Lafayette Oilman’s in the State ALBC Tournament numerous times and also won numerous club big bass awards. Ken was an awesome chef and cooked many scrumptious meals for the club after tournaments and some meetings. Club members loved fishing with Ken in club tournaments because he always provided gourment sandwiches for the boat. His personal best bass was 8.3 pounds. He will be greatly missed by all club members for his service and jovial attitude. He just had his beloved Skeeter put back in mint condition and was proud of the times he’d had in it over the last 20 some-odd years. Ken had his first camp at Toledo Bend in Shadow’s Landing and sold it to build his dream camp with his good friend, Corky Clark, on a beautiful cove near Milam, Texas. Ken was also a proud member of the Professional Backers Association (PBA) USL/ULL tailgating group and valued teammate of Doug, Steve, Nate, Emmett, Rodney and Rip. Over the years, he put out briskets and drunken chickens, and was especially loved for his corn salad recipe. He passed away at his residence after a brief illness. The family would like to thank Hospice of Acadiana and Dr. Gene Brierre for their care and compassion during his time of need. We would also like to thank David and Vicki Bender, who provided a level of care and support that can’t be measured. They were awesome! Kenny is survived by his wife of 15 years, Dolores Laughlin Begley; brother, Douglas A. Begley and wife Patricia; sister, Sherry Begley Dengel and husband Dan; son, Michael K. Begley; stepsons, James Bertrand and Shannon Bertrand; and loved his nephews, nieces, grand-nephews and grand-nieces. He was preceded in death by his parents, Kenneth Eugene Begley, Sr. and Ethel Estelle Begley, and sister, Leigh Begley Hendricks. Personal condolences may be sent to the Begley family at www.delhommefuneralhome.com. Delhomme Funeral Home, 1011 Bertrand Drive, Lafayette, LA is in charge of arrangements.

Memorial Services will be held at a later date for Kenneth Eugene Begley, Jr., 68, who passed away on April 21st, 2020. Kenny, a resident of Lafayette, was the son of the late Kenneth Begley, Sr., and the former (Ethel) Estelle Lockwood. Ken... View Obituary & Service Information

The family of Kenneth Eugene Begley Jr. created this Life Tributes page to make it easy to share your memories.

Memorial Services will be held at a later date for Kenneth Eugene...

Send flowers to the Begley family.