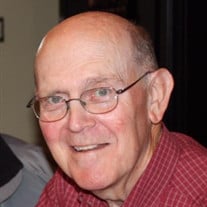 A private graveside service will be held on Thursday, April 23, 2020, at St. Alphonsus Cemetery in Maurice for Kenneth Anthony Dupuy, 82, who passed away at his home on April 20, 2020, after a lengthy illness. Reverend Paul Bienvenu, Pastor of St. Alphonsus Catholic Church, will serve as officiate. Kenneth Dupuy, more affectionately known to his loved ones and friends as “Ken”, “Dad”, “Gramps”, “Paw”, and “Parrain Ken” took his last labored breath at 4:55 AM on April 20, 2020. Kenneth was born in Houston, Texas on April 17, 1938. He was the son of Homer Joseph Dupuy, Sr. and the former Noemie Dugas. On June 9, 1960, Kenneth married Velores Breaux. They had two children and were married 59 years. Kenneth graduated from St. Thomas Aquinas High School in Houston, Texas in 1956. After high school, he joined the Army and was stationed in Germany and acted as a translator. Ken then began to pursue a career in child psychology. He attended USL in Lafayette, LA for four years and went on to complete his formal education at LSU in Baton Rouge, LA. Upon completing college, Kenneth worked as a child psychologist for the State of Louisiana in Alexandria and then returned home to Maurice and completed his career working at Crowley Mental Health Clinic. Over the years, Kenneth immersed himself in several hobbies. He collected antique bottles, as well as unusual business cards. He became an historian and did in-depth research into the history of Abbeville. Taking the knowledge he acquired from this research, Kenneth then became an author and published a very well-written book entitled, “Journeys into the Past”. Ken had a “Heart of Gold” and a “Joie de Vivre”. He had a kindness and compassion for others that knew no bounds. His love for family and friends was easy to witness in the way his face lit up when they were around, and Ken had a wonderful love and passion for the beauty of nature, which was reflected in his written observations that will be cherished by his loved ones for years to come. His chair at the Table of Life is empty now, but a more wondrous seat in Heaven awaits him, where he will once again be reunited with loved ones from the past…and Oh! What a celebration that will be! He will forever be remembered, loved and missed. Kenneth is survived by his wife, Velores Dupuy; his daughter, Lynette Dupuy Frederick and husband, James Frederick; his son, Carl Dupuy and wife, Tamra Simon Dupuy; grandchildren, Lauren Fredrick and partner, Stevie Menard; Jordan Frederick and wife, Lori Hebert Frederick; Landon Dupuy and fiancé, Kyla Hebert; Brooke Dupuy and fiancé, Colin Vaughn; Connor Dupuy; and five great-grandchildren, Adrianna Frederick; Avery Frederick; Easton Menard; Zaydon Dupuy and Sidney Menard. Ken has four siblings, Kathy Haltmar and husband, Warren; Homer Dupuy and wife, Carolyn; Louis Dupuy and wife, Chris; and Patricia Richard and husband, Mickey. He was preceded in death by his parents; brother, Patrick Dupuy and son-in-law, John Christopher Petitjean. Personal condolences may be sent to the Dupuy family at www.delhommefuneralhome.com. Delhomme Funeral Home, 200 Chief H. Fred Road, Maurice, LA is in charge of arrangements.

A private graveside service will be held on Thursday, April 23, 2020, at St. Alphonsus Cemetery in Maurice for Kenneth Anthony Dupuy, 82, who passed away at his home on April 20, 2020, after a lengthy illness. Reverend Paul Bienvenu, Pastor... View Obituary & Service Information

The family of Kenneth Anthony Dupuy created this Life Tributes page to make it easy to share your memories.

A private graveside service will be held on Thursday, April 23,...

Send flowers to the Dupuy family.