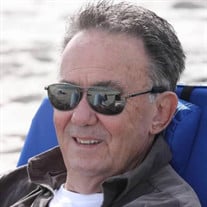 Funeral Services will be held at 1:00 PM on Saturday, December 19, 2020, at Delhomme Funeral Home for Kenneth L. “Ken” Butcher, 78, who passed away peacefully at Herman Memorial Hospital on December 11, 2020. He will be interred next to his wife and parents at Calvary Cemetery in Lafayette, LA. Ken was a resident of The Woodlands, TX but was born and raised in Lafayette, LA, graduating from Lafayette High School and the University of Louisiana at Lafayette. He was a brother of Kappa Alpha and served as President of his fraternity and the Intra-Fraternity Council. Ken spent his career in the oil industry working for Shell Oil Company, moving frequently between Morgan City, New Orleans, and Houston. Accepting a job as a laborer in the terminal at Morgan City, he worked his way up in the organization and at one point returned to Morgan City as the terminal director. At the end of his career, he was tapped as a subject matter expert assisting with the creation of an enterprise-wide operations management system. In retirement, Ken enjoyed seeing the country in his RV and was a member of both the Cruising Cajuns and Family Motorcoach Association. Ken is survived by his two sons, Lonny and Randy, his daughters-in-law, Jennifer and Jessica, and his grandchildren, Kenny, Brennan, and Janna. He was preceded in death by his parents, Jerry and Aline; sister, Lise Ann; and wife, Janice Comeaux Butcher. The family requests that visiting hours be observed at Delhomme Funeral Home - Bertrand on Saturday, December 19, 2020, from 10:00 AM until the time of service. Personal condolences may be sent to the Butcher Family at www.delhommefuneralhome.com. Delhomme Funeral Home, 1011 Bertrand Drive, Lafayette, LA, is in charge of funeral arrangements.

The family of Kenneth L. "Ken" Butcher created this Life Tributes page to make it easy to share your memories.

Funeral Services will be held at 1:00 PM on Saturday, December...

Send flowers to the Butcher family.