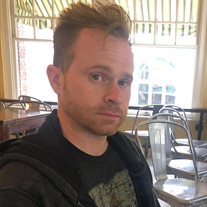 Kevin Alan Brown, 38, of Lafayette, Louisiana, passed away unexpectedly on February 14, 2020. Funeral Services will be held at 2:00 PM on Wednesday, February 19, 2020 in the Delhomme Chapel of the Flowers on Bertrand Drive. Visitation will be observed on Wednesday from 10:00 AM until the time of service. Kevin was born in Lafayette to Roy and Vicki Brown on January 26, 1982. He graduated from Lafayette High School in 2000. Kevin attended the University of Louisiana – Lafayette, and graduated in 2006 with a degree in Philosophy. He was a member of Tau Kappa Epsilon fraternity, where he made lasting friendships and gained an extended family. Kevin was married to Lisa Michelle Duhon on November 26, 2005 and they were blessed with two sons. He was a devoted father, who enjoyed sharing adventures with his sons Liam (13) and Elliot (7). Kevin was the proud uncle to his niece, Olivia Deblanc and nephews Mason Deblanc and Kaden Barbara, children of his wife’s sister, Christian Duhon Deblanc and her husband, Michael Deblanc. He also loved his niece, Ana Rene Duhon, daughter of Lisa’s brother, Paul Duhon II and his wife, Lauri Duhon. Employed as a Business Development Representative for POOLCORP, Kevin was valued and respected by his co-workers and customers. In 2018, Kevin was awarded for outstanding job performance, with a vacation to Aruba. He enjoyed travel and had also visited Amsterdam, Belize, Colorado and Washington State. Kayaking, camping, bicycling, fantasy football and video games were among his favorite activities. Art (drawing and painting) was a special interest of Kevin’s since childhood. An avid Saints fan, Kevin also loved the Ragin’ Cajuns and the Pelicans. Kevin loved life. He loved his friends and family like no other. Kevin loved being outdoors and enjoying all the earth had to offer. He was happiest in his kayak or lying in his hammock, soaking up the great world around him – a nice cold beer and a song with meaningful lyrics were always the icing on the cake. Kevin is survived by his wife, Lisa; sons, Liam and Elliot; parents, Roy and Vicki; his sister, Jennifer Brown-Dilán; his in-laws and nieces and nephews. Personal condolences may be sent to the Brown family at www.delhommefuneralhome.com. Delhomme Funeral Home, 1011 Bertrand Drive, Lafayette, LA is in charge of funeral arrangements.

Kevin Alan Brown, 38, of Lafayette, Louisiana, passed away unexpectedly on February 14, 2020. Funeral Services will be held at 2:00 PM on Wednesday, February 19, 2020 in the Delhomme Chapel of the Flowers on Bertrand Drive. Visitation will... View Obituary & Service Information

The family of Kevin Alan Brown created this Life Tributes page to make it easy to share your memories.

Send flowers to the Brown family.